Near intersection of Highway 83 and 4th Ave., Fort Pierre 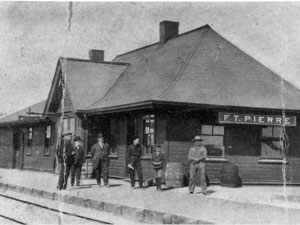 With the planned 1907 construction of a railroad bridge across the Missouri River from Pierre to Fort Pierre, the Chicago and NorthWestern railroad track was quickly laid from Fort Pierre to Rapid City. Along the route, depots were built to handle the passengers and freight along with providing supplies for the early steam engine powered trains. The Fort Pierre depot was completed in 1906 and served the community for over 50 years. Eventually trucks, cars, and airplanes largely replaced trains for personal travel and freight movement. By 1964, the railroad abandoned many depots, including the Fort Pierre depot, and the buildings were sold as surplus. 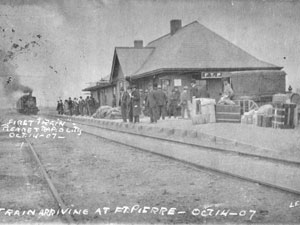 Mr. Shirley Miller, a rancher from Mud Butte, South Dakota, bought the surplus Fort Pierre depot. He cut the high portion of the roof off to get under power lines and hauled the depot to his ranch, a distance of about 170 miles. Over the next 50 years, the building was used as a storage shed, a sheep shearing facility and a wool storage area. Because of Mr. Miller’s careful cribbing and maintenance of the depot, it remains a solid and serviceable building.

Around the year 2008, Brian Scott was doing some insurance adjustment in the Mud Butte area and confirmed that the building on Shirley Miller’s ranch was indeed the old Fort Pierre depot. After some discussion, Mr. Miller agreed to donate the building to the Verendrye Museum in Fort Pierre for use as a museum artifact. 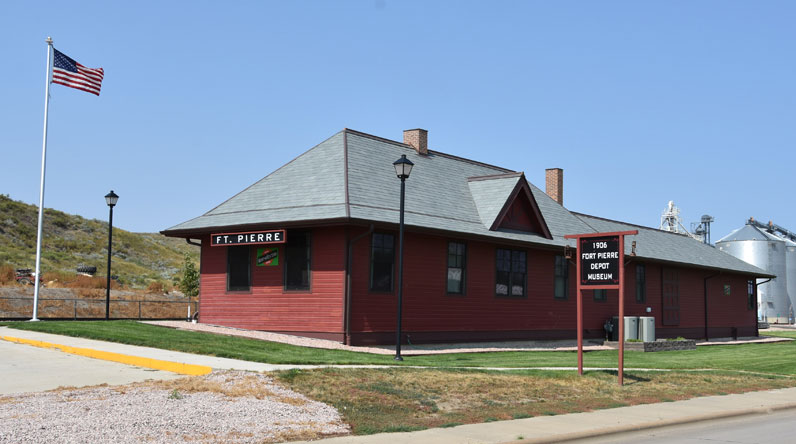 The Verendrye Museum board of directors established a “Bring It Home” Committee to oversee the return of the depot, its placement on a permanent foundation, and its restoration as a community historic structure. Several grants were obtained and numerous community supporters donated their services to begin the restoration of the 110’ x 20’ building which is handicapped accessible. It opened in 2016 and was completely restored and furnished with original and added memorabilia in 2018. The painted siding and granite tile roofing resembles the original wainscoting and bead board material of the inside walls and ceiling stayed intact with cleaning and a new stain/paint of the original colors. There are two of the original ticket windows in the Agent’s room as well as the counters/cupboards and typewriter, etc. Wood burning stoves and chimneys were included in the original places in the Men’s Waiting Room, Agent’s Room and the Women & Children’s Waiting Room. The flooring in the first four rooms was replaced with similar maple wood while the freight room flooring is scraped hickory.