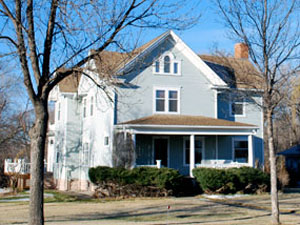 The Gaylord Sumner House is significant for its architecture and its role as the home of Gaylord Sumner, an important businessman. Originally a small one-and-one-half-story cottage constructed in 1889, the house grew to two stories between 1896 and 1898, with the raising of the original cottage to the second floor level and the insertion of a new first floor beneath the original building. The house is an interesting transition between the Queen Anne and Colonial Revival styles. The somewhat irregular plan and massing of the house, the high multiple roofs with their ridges meeting at right angles, prominent gables, and the large porch all suggest Queen Anne stylistic characteristics. The detailing of the eaves, front gable, and the Palladian window are Colonial Revival influences.

Gaylord Sumner came to Fort Pierre from Belfast, New York in 1890. In association with C. L. Millett, Sumner organized the Stockgrowers’ Bank the same year. The two also had interests in banks in Midland, Philip, Kadoka, Cottonwood, and Milesville. Sumner married Ida Ricketts, whose mother owned a popular boarding house in town. In addition, the prominent Sumner operated the Stanley County Abstract Company and owned the lumberyard in town. Sumner lived in the house until his death in 1967, surviving the difficulties of the Great Depression by such means as keeping chickens in the backyard.