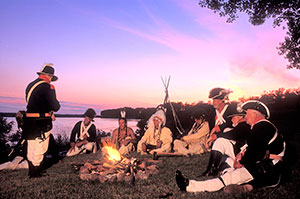 A major encounter which affected the destiny of all inhabitants of the region occurred in Fort Pierre on September 24-28, 1804. At the mouth of the Bad River, in present-day Fischers Lilly Park members of Lewis and Clark’s Corps of Discovery met for the first time with the Lakota people, known to them as the Teton Sioux. Differences in trade objectives, diplomacy, and the lack of an interpreter lead to an armed confrontation, the closest Lewis and Clark came to a premature end to their expedition. Today the park is certified as a National Park Service Lewis and Clark National Historic Trail site.

In the morning Lewis and Clark moved upriver, picking up Private John Colter from Farm Island where he had camped the night before and killed four elk. They arrived at the mouth of a river their maps called the Little Missouri. The captains renamed it the Teton in honor of the Teton Lakota who camped nearby. The Lakota called it the Bad, and that is the name which has survived. At what is today Lilly Park in Fort Pierre, Captain William Clark met and smoked a pipe with Chief Buffalo Medicine.

Black Buffalo and the other chiefs were invited to tour the keelboat, where they were presented gifts. Captain Clark conducted them back to Lilly Park in the pirogue. He wrote, “As soon as I landed the pirogue, three of their young men seized the cable. Chief Black Buffalo then took hold of the rope and ordered the young warriors away.” Clark was not permitted to leave the shore; the pirogue soon returned with twelve armed men. The boat guns, and the soldiers’ muzzle-loading guns, were pointed directly at the Lakota, whose numbers had now grown to about 100. (The expedition numbered forty-four.) Both sides stood down. The captains went upstream on the west side of the river to camp for the night. Clark writes, “I called this island Bad Humored Island, as we were in a bad humor.” (Bad Humored Island was later named Marion’s Island, very near Fort Pierre’s Holiday Inn Express.)

The expedition and Black Buffalo together traveled 4 1/2 miles to his village (now Oahe Campground 3), where a feast and celebration were being prepared. Chief Black Buffalo raised the pipe of peace from its stand of forked sticks and pointed it to the heavens, the four quarters of the globe, and the earth. After smoking and speeches, the group feasted on cooked dog, pemmican (buffalo meat and fat), and ground potato. At dark, a large fire was made in the center, and the dance began.

The men of the expedition were invited by Chief Black Buffalo back to the large council house for another dance, which lasted until about 1:00 p.m. Lewis and Clark and company returned to their keelboat, accompanied by two chiefs. As the pirogue approached the keelboat, the steersman misjudged, cutting the metal anchor cable.

After searching in vain for the lost anchor, the captains prepared to depart. Several of the Lakota warriors seized the rope holding the keelboat, and refused to leave. Captain Clark negotiated with Chief Black Buffalo, Black Buffalo jerked the rope back from his soldiers and ordered his men ashore. The confrontation over, the expedition continued upstream.