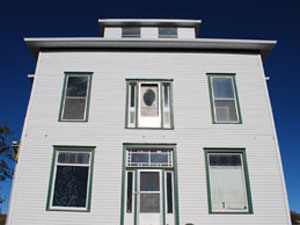 Constructed in 1892, the Old Fort Pierre School was the first high school in Fort Pierre and one of the first in western South Dakota. The two-story school had four classrooms. At first, only elementary grades were taught in the building. Some high school courses were added beginning in 1901, but by 1903, the school included first intermediate, second intermediate, and a high school program. The first graduating class consisted of three students in 1905. The old high school continued to function until 1909 when a new building was constructed to accommodate more students. This rapid turnover in school buildings is evidence of the growth of Stanley County during the early 1900’s. The Old Fort Pierre School was remodeled and turned into apartments.

The school has a symmetrical façade and floor plan, hipped roof, double hung windows and doorway details, cottage windows, stained glass transom window over entrance, and very little ornamentation. Originally, the building had a large two-story wraparound porch and a bell tower. It is currently being rehabilitated.