In June 1919, ex-servicemen in the Pierre area met at the Pierre City auditorium to begin organizing. Ed Phares was elected temporary chairman and Louverne Ballou temporary secretary. The name “Pierre Post” was selected because the organizers felt that the community would be better served keeping its name always in the foreground. This was nontraditional, as many posts were commonly named after fallen comrades.

Pierre Post was active from the start. In July 1919, a delegation was formed to boost for Pierre and a committee was appointed to arrange dances at the auditorium to help fund the organization. The Pierre city commission also authorized the local Legion to build a permanent campground near McKinley School to assist tourists traveling through town. The Legion was also put in charge of the first “Armistice Day Celebration” on November 11, which was to feature rough riding, aero plane fights, boxing and a football game. A blizzard hampered this first celebration and many were unable to attend, but a tradition of observance was put in place. 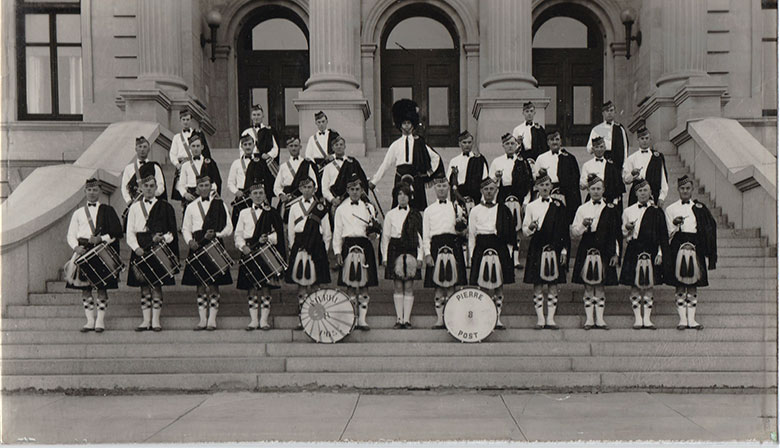 Pierre Post met in a variety of buildings during the interwar years including the city auditorium, St. Charles Hotel, Hyde Block, First National Bank, Hughes County courthouse, and other venues. In early 1940, Pierre Post voted unanimously to construct a new Legion building. Plans were made to construct a large log building on the banks of the Missouri River at the foot of Pierre Street. The building was to be centered at the base of the street and was proposed to include decorative landscaping. W.H. Pringle, local builder and chairman of the building committee, reported that the cost was not to exceed $3,500. The log building was to be built out of native Black Hills logs, which were to be available in early summer of 1940. Pringle was placed in charge of construction and traveled to the Black Hills to inspect and select the logs.

Unfortunately, construction of the building was slow or postponed. It was not until April of 1941 that work occurred as Pringle introduced Mr. Berglund as superintendent of the project to the Legion board. Money was evidently a cause of the delay, as the Legion began raising money with a cement sack sale later in April. Costs had risen to $4,200, but the Legion had also secured the National Youth Administration (NYA) laborers under the direction of a Mr. Vickers to erect the building. The agreement was that the post would furnish all materials while the NYA, sponsored by the city of Pierre, would supply the labor. The NYA retained overall supervisory responsibility.

In the summer of 1941, the NYA’s out-of-school work program employed about 1,082 youths in South Dakota. These quotas allowed for intermittent construction of the Legion building. After a delay during the summer while the logs were seasoned, work resumed in October. Final arrangement between the NYA and city were made for completion and Mr. Kirby of Hot Springs was assigned foreman of the crew. Millwork was ordered so that the building could be enclosed before winter and haste was made to finish the fireplace on the east side of the building. The fireplace on the west wall was removed and a central heating plant was also under construction. 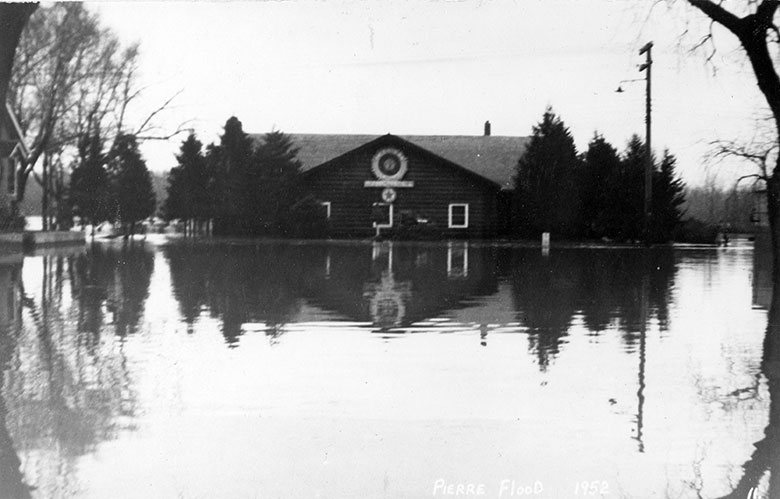 With National Youth Administration (NYA) labor in short supply in 1942 due to changes in policy, Pierre Post approved hiring additional laborers to speed up the completion. The concrete floor was poured in early December and the millwork was on hand for installation. Pringle reported in January of 1942 that the building was nearing completion and may be finished in time for the next monthly meeting. Pringle also reported that paid membership had reached 113, which was important as a list of members was to be included in the building’s cornerstone.

State NYA officers inspected the building in February and stated that it was the only project in the state in which a city was sponsoring a veterans’ project. Construction was still ongoing in April, at which time the first meeting was held in the unfinished building. In late April, the NYA stopped work on the building as it was determined not essential to the defense of the country. This required Pierre Post to raise more money to complete the building, which had to be done by Memorial Day in order to host the State convention. A benefit dance, featuring Keith’s Orchestra and Homer Myers on his Hammond Organ, was held in May to raise additional funds.

The building was completed in June of 1942. Ed Downs, director of the NYA, presented Mayor John B. Griffin with a key to the building in an official ceremony. The Pierre City Commission had passed a motion in May putting control of the building in the hands of the Legion.

The Legion Cabin has served as Pierre Post 8’s home, but it has also been used for a variety of events within the community. When the Pierre municipal airport was converted into an Army Air Base in 1942, a full complement of troops arrived with it. The Legion turned over use of the building to the United Services Organization (USO). By May of 1944, over 16,000 servicemen had visited this USO making it one of the most successful establishments in the northwest. 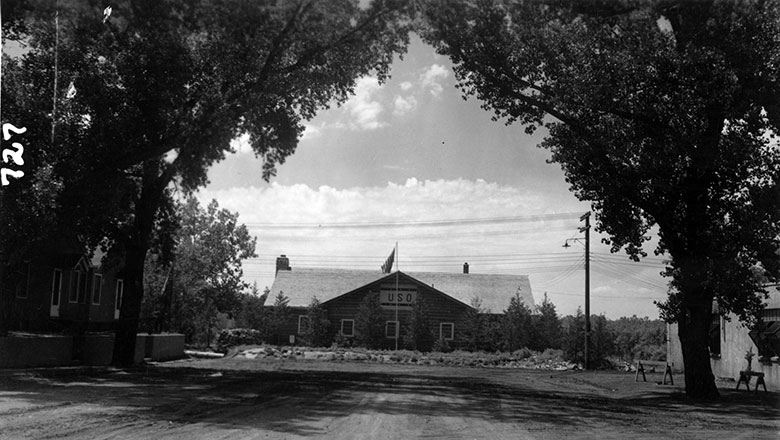 The cabin was also rented or donated for use. For example, the cabin hosted meetings of political organizations in the 1960s as well as a reunion of Civilian Conservation Corps members who built nearby Farm Island Park. It also hosted a large number of talent plays, minstrel shows, jamborees, roaring gulch carnivals, and other activities over the years. In the 1950s, the Pierre Post 8 cabin was the primary establishment to offer dancing, refreshments, and entertainment to the public in the winter months.