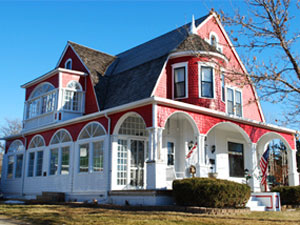 Built in 1904, the Brink-Wegner House is one of Pierre’s most ornate and interesting homes. The Queen Anne, shingle-style home contains one of the best period interiors in the State, including a mural ceiling in the dining room. Built in 1904, by Andrew C. Brink, it was purchased in 1923 by the H. C. Wegner family who lived in it for many years. Wallace Curl purchased the building in 1965 and moved it from 109 South Highland Avenue to its present location. The current owners are Jean and Mike Cowan.

Shingle style features include the irregular Gabriel roof, clapboard siding and four types of shingles siding the upper two-thirds of the building. A variety of window shapes and sizes and a second story bay window with a conical top and finial on the house are additional manifestations of the style. 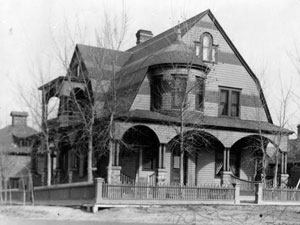 Andrew C. Brink was one of the city’s most prominent real estate men and contractors when he built the house in 1904. Some believe the design resembles a side-wheel steamboat, an important mode of transportation on the Missouri River on which Pierre is located. Brink lived in the house until his death in 1912, and his family continued to reside there until 1923 when Henry C. Wegner bought the home.

Wegner was the owner of South Dakota’s oldest automobile agency, Wegner Auto Company — still in business. His heirs owned the house until 1965 when Wallace Curl, a Pierre educator, purchased and moved it. The Brink-Wegner House was originally located on Highland Avenue near the St. Charles Hotel. Curl moved the home in 1977 to prevent its demolition. Incidentally this house was the last residential building located in a prime commercial location.