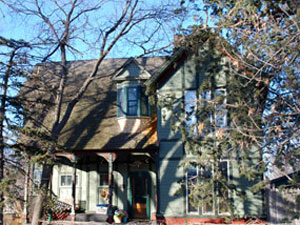 The Blackburn House is one of the oldest remaining residential buildings in the City of Pierre and has been the home of several prominent members of the community. H. O. Fishback, a banker and real estate speculator, constructed the house in 1883 as an example to encourage new settlers and to help establish the new community in East Pierre. The house is a fine example of the Late Victorian Stick style.

The home has a cross gable roof that creates an asymmetrical front façade. The façade features ribbons of three one-over-one double-hung windows on both the first and second floors. A gabled dormer interrupts the roof of the front façade. The base and the pediment of the dormer have octagonal shingles, and the window is a canted bay window. The exterior features horizontal and vertical stick bracing ornamentation. Beaded wainscoting covers the bottom two feet of the exterior of the house. An open porch topped with a high pitch cedar-shingle roof continued from the rest of the house completes the front façade. The porch roof supports are lightly figured posts with decorative “sunrise” brackets.

William Maxwell Blackburn, who purchased the house in 1887, was an ecclesiastical historian internationally known through his authorship of numerous books and articles. While living in the house, he continued to write books and articles on various topics of local and national interest such as the philosophy of education, geology, and South Dakota history. Blackburn published more than 30 books on topics ranging from young adult fiction to religious histories. He also was a founding member of the South Dakota Historical Society. While living in the house, Blackburn served as president and active promoter of Pierre University, a Presbyterian institution in East Pierre from 1885 to 1898. The house is the only known remaining building that has any documented relationship with Pierre University. 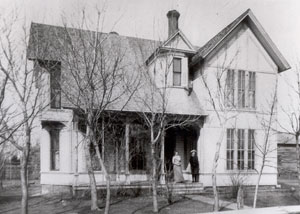 The third owner of the property was C. B. Billinghurst, a well-known, important community leader in Pierre during its second boom period after 1900. Billinghurst was a prolific writer on topics of local and statewide concern. He published his articles in his own newspaper, the Pierre Daily. They also appeared in other South Dakota community newspapers. He established the State Publishing Company with J. Hipple. Billinghurst kept an office in the home where he pursued his writing and managed his various business interests.

Harold and Irma King became the fourth owners when they bought the Blackburn house in 1927. The two opened King’s Korner Grocery in 1937. Harold was a fireman at the Pierre Airbase assigned to the Corps of Engineers. He also served as Hughes County Treasurer and Pierre Assessor. Irma was a national award-winning poet, songwriter, and author. Her lyrics to the song “These Dakota Lands” received the 1988 Western Heritage Award from the National Cowboy Hall of Fame. Many of Irma King’s poems center on the Blackburn House.