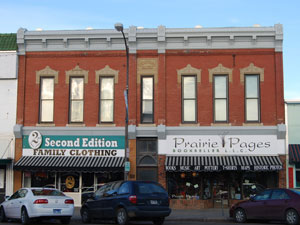 Built in 1884, Central Block was one of the first masonry commercial blocks erected in Pierre and was often referred to as the handsomest building in town. It provided space for two major retail businesses on the first floor, housed several small professional offices on the second floor, and served as a prototype for further business construction in the city during the next 25 years. It is one of the few remaining historic buildings within the city’s original commercial district.

The 1884 Republican Territorial Convention Ball was held in the new Central Block. The ball was the occasion of the grand opening of the building. The Rochester Orchestra entertained several hundred guests.

By 1887, William F. Baird controlled much of Central Block. He was a partner in the Baird, Burke & Brown real estate firm, which continues today as Burke Real Estate. Baird’s wife, Alice, was Pierre’s first female physician, specializing in “diseases of women and children.” She had her practice in the Central Block throughout the 1890’s. In the early 1900’s, Henry R. Horner owned the southern half of the building. Horner served as the 1884 delegate to the Hughes County Republican convention and as Pierre City Attorney. He was elected to the South Dakota Senate in 1893 and 1897. Horner’s law firm, Horner, Martens, and Goldsmith, exists today as May, Adam, Gerdes, and Thompson and is the oldest law firm in South Dakota. Since the building opened in 1884, it has housed grocery, pharmacy, clothing, variety, and appliance stores. In addition, many prominent attorneys, real estate agencies, and health care professionals have had their offices here.

Central Block is a two-story commercial building with a stone foundation and masonry walls. Trimmings are made of St. Louis pressed brick and Kansas stone. The building is designed in the popular Commercial style and has Italianate features. The east facade has glass store fronts with large separate doors for each retailer. A central entry door leads to the second story. The second story fenestration features seven elongated rectangular windows with stone window hoods. The center window is capped with a carved stone plaque with the words “Central Block” in relief. Above the window line is an intricate pressed metal cornice, supported by brick corbelling.