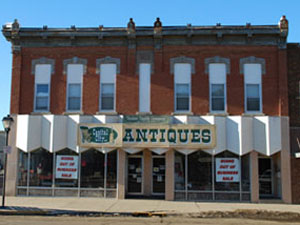 Dating from 1883, the Italianate style Hilger Block was the first brick commercial building constructed in Pierre. The building has played an important role in local commerce and economic development ever since. Pierre became the economic center of south central South Dakota during the great Dakota boom of 1878-1887, an era of good weather and the gold rush in the Black Hills. Because of the economic boom, J.D. Hilger built the Hilger Block and operated a clothing store there. He later partnered with Anthony Hengel to form Hilger and Hengel Clothing Company, which occupied the first floor. The upper level housed professional offices. The 1890 Pierre Directory listed 12 tenants in the building. Hengel eventually became sole owner and named the business the Tony Clothing Company. The upstairs continued to house professional offices, mainly for doctors, attorneys, and insurance agents.

The Hilger Block was considered one of the most desirable business buildings in town because of its central location in the business district. Because it is in West Pierre, which eventually prevailed over East Pierre as the central business district, the building became one of the most sought after pieces of real estate in town. A year after its construction, 10 more brick commercial buildings replaced wooden buildings on Pierre Street strengthening the town’s economic prominence in the region.

The Italianate style was popular in South Dakota from about 1870 to 1900. Characteristics of the style found on the Hilger Block include the long narrow window openings, elaborate window hoods, and a decorative cornice with brackets. Although the storefront and second floor windows have been altered, the stone sills, lintels, window hoods, and cornice remain. The building still conveys its historic 19th and early 20th century sense of feeling and association.

The east façade features a recessed central entry flanked by large windows with stone sills and segmented stone window hoods. Above the windows are corbelled bricks that lead to a cornice with brackets, dentils, and decorative moldings. The south elevation has a display window at the southeast corner and a small garage door at the southwest corner on the first floor. The windows on the second floor also have stone sills and lintels. A flat plain parapet runs the length of the elevation.