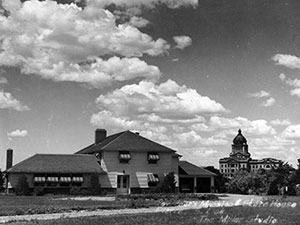 In Pierre’s early days, there was no swank Governor’s mansion befitting the position. Instead, Governors rented apartments or stayed at popular Pierre hotels such as the Locke, St. Charles and Wells House. While this sufficed, it was only a matter of time until South Dakota paralleled other states in providing a permanent residence for its Governor.

The Legislature authorized the State Capitol Commission to search for a site in 1917. Three years later the commission purchased a tract of land east of Capitol Lake containing the Hodoval home. This became the Governor’s residence in 1920. The first Governor to live the new residence was Governor Carl Gunderson in 1925. This house was moved to 602 N Euclid Avenue in 1936 and is still standing today (2016).

It is likely that this first mansion was never intended to be the permanent residence – it had simply come with the land. However, a downswing in South Dakota’s agricultural economy in the 1920s and the onset of the Great Depression in the 1930s left the state with little money to build much of anything. So, it looked to the federal government.

In 1935, Governor Tom Berry’s administration applied for and received a grant from the Works Progress Administration (WPA). The WPA was part of President Franklin Roosevelt’s “Second New Deal” and became, perhaps, the most well known of all New Deal era programs.

Construction began in the spring of 1936, employing 20-35 men during the duration of the project. Berry wanted the mansion to be constructed of native stone, but the WPA deemed that too expensive. Instead, Black Hills lumber prepared by the Civilian Conservation Corp (CCC) was used. The two-story fourteen-room mansion cost $27,661, of which the WPA covered $25,861 with the state picking up the remaining $1,800.

Governor Leslie Jensen was the first to move into the mansion in 1937. Governors continued to live there for the next 66 years. In 2003, plans called for the construction of a new mansion. The old mansion was sold and moved to the Rapid City vicinity. The new mansion was completed in 2005 on the exact location of the old one.