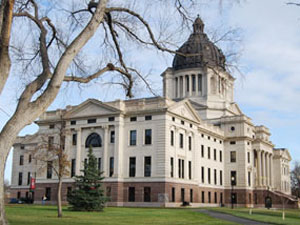 Completed in 1910, the South Dakota State Capitol is the best example of Neoclassical architecture in South Dakota and the symbol of State government for nearly 100 years. As various State officials have come and gone, the capitol remains a vivid reminder of South Dakota’s history, an architectural and historic landmark, not only for the State, but also for the City of Pierre. This grand building serves as a reminder of the importance of the numerous and tedious campaign fights Pierre endured to secure the status of capital.

The motivation for erecting the building came after the third election to determine the location of the State capital. Pierre won the election to be the temporary State capital in 1889 and another election in 1890 to become the permanent capital. On three different occasions, bills were introduced into the legislature to move the capital from Pierre. In 1904, a bill finally passed in the legislature to let the people vote once again on the location of the State capital. Pierre won this election as well. After three elections, many citizens believed that a large, permanent building would end any further relocation efforts.

To save money on the project, South Dakota hired Bell & Detweiler Architects of Minneapolis, Minnesota and selected their design for the Montana State Capitol to use again for the South Dakota State Capitol with some variations, rather than asking the architects for an original design. Construction on the building began in 1905 and was complete by 1910. The total cost of the building was under one million dollars. 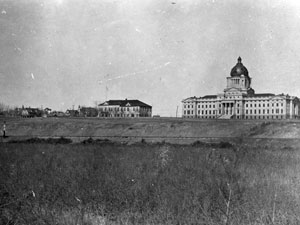 The picture shows two sets of rail road tracks in the foreground and both the old three story wooden Capitol and the new Capitol Building.

The South Dakota State Capitol features a copper dome, Corinthian columns, rusticated walls of granite and Bedford limestone, and a decorative interior. The building has a central rotunda flanked by the legislative wings, making it somewhat similar to the nation’s capitol. The four-story Neoclassical building has some English and Italian Renaissance features. Its granite foundation rests on boulders collected from the surrounding prairie. Native granite is also the material used for the steps and some of the window trimming. The first level of the capitol uses Marquette Raindrop sandstone for its facing while the other stories are of Bedford limestone.

The interior is just as exquisite as the exterior. Italian workers laid the terrazzo tile floors. The capitol is known for its attractive murals and paintings. Under the dome in the rotunda, four large round paintings feature Greek goddesses that symbolize the four major South Dakota themes: agriculture, livestock, mining, and family. Under each of these paintings is a flag display. Four contemporary sculptures, two by Harry Daniel Webster and two by Gutzon Borglum, the sculptor of Mount Rushmore, adorn the rotunda and complement the original artwork of the interior. They symbolize Wisdom, Vision, Courage, and Integrity. The capitol also contains paintings by Oscar Howe, the Artist Laureate of the State.

The interior of the building underwent numerous modernizing changes. Restoration work began in 1977 and was complete in 1989 in time for the State’s centennial celebration. The ceilings, wall designs, color schemes, window treatments, and carpeted areas throughout the building were part of the project. The work restored everything in the capitol back to the building’s original colors and luster.

The attractively landscaped capitol grounds are the site of numerous memorials dedicated to veterans of war, law enforcement, and firefighters. Capitol Lake is a man made artesian lake constructed in 1913. The Flaming Fountain Memorial stands along the shore of the lake. It is a perpetually burning flame fed by natural gas.