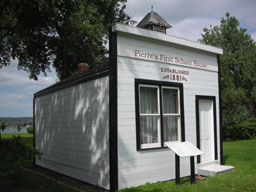 In the fall of 1880, Max J Schubert from Watertown, WI, came to Pierre and bought land to build a drug store. He came back to Pierre in spring of 1881 with two carpenters and precut lumber to build the drug store and built a small one room, 14’x20’ temporary building in town, in the middle of the block on the east side of Coteau Street, to use while building the larger two-story drug store.

According to one resource, the building was used then in 1881 as a school for one year until no longer needed when a public school opened that October. There were eighteen students and the teacher was Louise Mip Cavalier.

There were two or three buildings of the same size and look of the first school built in the early 1880’s.

In an interview in 1937 with Louise Kehr of the Kehr Grocery Store, the building was located on Dakota Avenue. In this interview for the Hughes County History , she told that previous to it being used as a school, it was a millinery shop, operated by Mrs. Tillman, her cousin. She told, “enterprising early citizens felt the need of educational facilities and transformed this 16 x 20 foot wooden structure into a school of learning”.

In 1965, it was moved to the present location in Steamboat Park. Since 1966, the East Pierre Women’s Club maintains it. They have furnished the schoolhouse with antique desks, maps, potbelly stove, textbooks, and teacher’s desk.