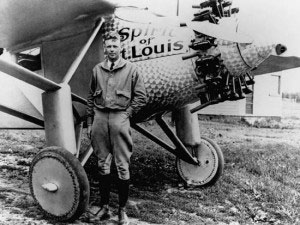 Charles Lindbergh standing next to his airplane the “Spirit of St. Louis”

Most of us know that Colonel Charles Augustus Lindbergh was the first to fly solo and non-stop from New York to Paris. His 33½ hour solo flight on May 20-21, 1927, in a single engine monoplane, was “the” aeronautical achievement which had fascinated the world. Lindbergh’s determination, courage and skill piloting the Ryan monoplane — the ‘Spirit of St. Louis’ — which had no radio and only minimal navigation equipment was a true aviation “first”.

When he arrived back in the United States, the Daniel Guggenheim Fund and the U.S. Department of Commerce sponsored Lindbergh in a nation-wide air tour. The stated purpose was to stimulate interest in commercial aviation and to demonstrate the safety and punctuality of flight. The tour was designed to visit all the state capitals cities.

After a short exhibition of circles and maneuvers over Ft. Pierre, Pierre, and the landing field, Lindberg landed in a private pasture north of Pierre at exactly 4 pm on Thursday September 1st 1927. Flying another aircraft, D. E. Keyhoe, his manager, and Lieutenant Philip Love accompanied him on the tour on behalf of the national Department of Commerce. Their trip to Pierre started in Denver.

Ultimately this event would result in the city purchasing the landing site and using it as Pierre’s first airport. The site served as a landing field for both private and commercial aircraft for the next twelve years. 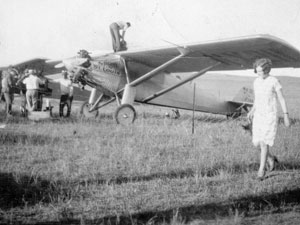 The lady walking in front of the “Spirit of St. Louis” is Henerietta Paine from Ree Heights, SD

The field had been prepared on Wednesday by the American Legionnaires under the direction of Godfrey Roberts. A two-hundred foot circle was drawn on the east end of the field, with one runway landing north from the circle and a second runway west from the circle. Hopefully Lindbergh would use the west runway parking, then park the plane behind a fence separating the field from the spectators’ cars.

Cars had been parked on the 40 acres adjoining the field. State Sheriff Fred Minier arranged to have two deputies on motorcycles direct traffic to a 40 acre parking area adjoining the ‘airport’. The public was to remain behind the fence. Walter H. Burke, commander of the American Legion, had seen to it that cattle were moved from the field and designed security. Also, rocks had been cleared and the grass cut. And By 3 PM, the local band was in place at the landing field.

Lindbergh was greeted by Governor William. John Bulow, Mayor John. E. Hipple, President Claude Coon of the Commercial Club, President Charles Whitlock of the Kiwanis club, Commander Walter H Burke of the American Legion, Dr T. F. Riggs, Charles Lee Hyde, not to mention many others. The crowd, estimated at 3800, waiting behind a fence, gave Lindberg a very warm welcome. Interestingly, the Legionnaires recorded 700 cars from 39 SD counties and 18 from out of state.

Security for the planes during the landing and overnight, was handled by Battery ‘C’ commanded by Lieutenant Lower. Interestingly, two ropes used to tie down ‘The Spirit of Saint Louis’ are still in the possession of private citizens in Pierre.

Colonel Lindbergh and the members of the reception committee rode in a large open car driven by Don Lawrence leading a long procession of cars from the landing field through the streets of Pierre. The group stopped at the St. Charles Hotel where the special guests were to spend the night.

A dinner had been scheduled for 7 PM hosted by Mayor and Mrs. John E. Hipple, at the Hipple home on Highland Avenue. Present were the dignitaries from the reception committee, Mr. and Mrs. Robert. B. Hipple and Mr. and Mrs. James B. Hipple.

At 8 PM the reception committee escorted by the American Legion Scotch band — the “Kilties” — went to the front steps of the Capitol. A crowd estimated at 5,000 was waiting in front of the capitol and a huge cheer greeted Lindbergh as he appeared on the front steps. Dwight Olander happened to have an extensive outfit for broadcasting the speeches. He had arranged several loud speakers spread along the sidewalk to the street to enable everyone to hear what Colonel Lindbergh and other speakers had to say. 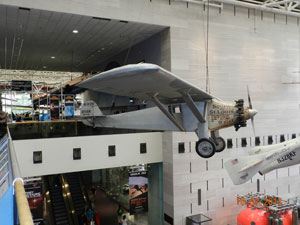 Mayor Hipple spoke briefly, then turned the program over to Governor Bulow who spoke at some length about Colonel Lindbergh and his accomplishments. Bulow said though Lindbergh had crossed the Atlantic and returned to tell of it, he predicted someday some man would leave the earth, journey to the moon, and return to tell of it. Bulow concluded his remarks by presenting Colonel Lindbergh with a white sheepskin, inscribed with a resolution of tribute adopted a special session of the South Dakota legislature in June.

Colonel Lindbergh then spoke briefly, confining his remarks to an explanation of his presence in Pierre. He declared that Pierre was the center of a large portion of the country not previously covered on his continental tour. He said his trip was the forerunner of a time in the near future when people of Pierre could leave the Pierre airport and arrive at the east or west coast on the same day.

He also remarked that Pierre was especially fortunate to have a natural landing field. He claimed that it would be important for all cities to develop airports. This tour was to be an important step in the overall aviation program. A well developed aviation program would certainly benefit the east and result in the generation of hundreds of thousands of dollars, if not millions of dollars. Preparation would be necessary but well worth the expense.

Thus, shortly after 10 PM, Colonel Lindbergh reappeared, accompanied by Walter Burke commander of the American Legion post. He was escorted to the stage through the applauding crowd. He declined to speak but did sit on the stage during part of the dance, then he retired.

He returned to the Hipple home for a few minutes before returning to the St. Charles. He simply wished to bid goodbye to Mr. and Mrs. Hipple and to thank them for the dinner, then returned to his hotel and retired.

Friday morning Lindbergh and his team had planned to take off at 9 AM, but were delayed by a need to prime an oil pump. Repairs complete, Lindbergh and party took off at 9:30, flying over Rapid City and Deadwood and landed in Cheyenne, Wyoming.