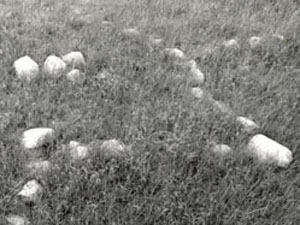 Turtle Effigy is a large stone alignment on the earth in the shape of a turtle. No one knows for sure who made the effigy. According to one story not attributed to a specific tribe, “An Arikara lookout surprised by a Sioux War party and badly wounded, took flight to warn his kinsmen. He ran about one-half mile before dying. The Sioux, admiring his bravery, placed a rock for each drop of his blood and constructed a cairn (pile of stones) where he died. They signed it with a tribal band insignia of a turtle.”

Effigies are patterns and pictures on the land made by the careful placement of stones. More than 100 stone effigies have been found in South Dakota. Most are located on high bluffs and ridges. Although we know that American Indians created these sites, we understand little about why the effigies were made. Archaeologists believe that some effigies may be commemorative, marking significant places, people, or events. Others may have helped aid the hunt or held spiritual power. No one knows for sure, and many different stories often are associated with a single effigy.

Sites like the turtle effigy are special places and vulnerable to harm. A number of known effigies have been lost forever, because people removed the stones or damaged the design.