By the 1840’s, thousands of people were travelling west, but they initially posed little threat to the Plains Indians, because they did not settle on the Plains but instead headed to California and Oregon. Once they did begin to stake claims to land on the Plains, the Indians acted to protect their lands, and conflict erupted between the American Indians and pioneers. Old Fort Sully was one of a series of military forts established to keep peace on the Northern Plains.

Following the Dakota War of 1862, also referred to as the Sioux Uprising, the War Department sent two large contingents of soldiers to pursue any American Indians perceived as hostile. General Alfred E. Sully, who led one of the detachments, had orders to pacify regions of North and South Dakota. On September 3rd, 1863, Sully’s troops attacked and defeated a band of American Indians at Whitestone Hill in North Dakota. After the battle, most of the men were sent downstream to garrison Fort Randall near the South Dakota/Nebraska border. The remaining troops constructed Old Fort Sully east of Pierre using cottonwood logs. 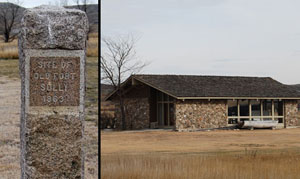 The fort was one of a series of new posts along the Missouri River which, over the next 15 years, extended the power of the United States Army to the Rocky Mountains. The army abandoned Old Fort Sully in late summer of 1866, however, because of the deplorable conditions. There was no grass or wood within two miles; muddy river water had to be hauled to the fort; and rats, mice, and fleas were everywhere. A new Fort Sully was constructed about 30 miles upriver. The original fort was dismantled to use as fuel for steamboats.

No buildings remain, but markers indicate the corners of the fort. The Farm Island Visitor Center stands in the center of the original Fort Sully and provides exhibits that help visitors learn more about the fort.