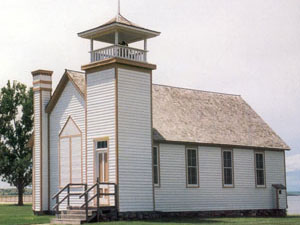 In 1874, Reverend Thomas L. Riggs, a Congregationalist minister, and his first wife, Cornelia Margaret “Nina” Foster, established the Oahe Mission to serve the Sioux Indians of central South Dakota. The missionaries chose to build on the site of an old Arikara Indian village called Ti Tanke Ohe, later shortened to “Oahe.” The mission eventually adopted the name of the Indian village, which also became the name of the dam and lake that now cover the site. The Oahe Chapel is now the only remaining building associated with the Oahe Mission.

The Oahe Mission was on the east bank of the Missouri River about five miles upriver from the modern-day location of the chapel. In the beginning, a log house was the center of the mission. In only three short years, the house became too small, and the Indians agreed to help Reverend Riggs build a chapel, which was finished by September of 1877. The chapel’s design is a one-story nave layout, with a one-and-one-half story bell tower. 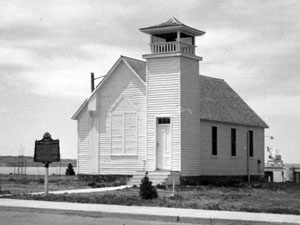 A sign in front of the building includes the text “Oahe Mission School and Chapel”.

As with many other buildings on the frontier, the chapel served a dual purpose–as a schoolhouse and the center of religious life. The mission also opened The Oahe Industrial School in 1883 as a boarding school for Indian children and a second boarding school for young girls in the 1890s. Starting with an ABC primer, the men, women, and children of the mission all learned to read the Bible first in the Dakota language and later in English. As Europeans settled in the community, they joined in Sunday and holiday worship at the chapel. Services were originally in the Dakota language, but by the 1930’s were only in English.

Completion of the Oahe Dam led to the flooding of the original site of the Oahe Chapel. In the 1950’s during the construction of the dam, the chapel was given to the State of South Dakota, and the State Historical Society was put in charge of its restoration and continued preservation. In 1957, the society moved the chapel to a temporary location to escape the flooding and then moved it again in 1964 to its current location.