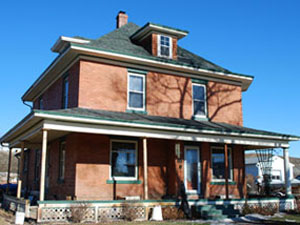 Constructed in 1906, the Jefferson Davis Carr house is important for its associations with an early settler in Stanley County who built the home, and for its architectural significance. The house is a somewhat rare domestic building because it is constructed of all locally manufactured materials. The home is a brick foursquare with Colonial Revival elements including the one-story wraparound porch and classical columns.

Jefferson Davis Carr began ranching in Stanley County in 1891. In 1906, Carl Wagner built him a house in Fort Pierre of reddish-yellow, gumbo brick from the local Franc Rauch brick yard. Carr decided he needed a residence in town for his family to ensure his children’s education. Incorporated as the Empire State Cattle Company and commonly known as the Mississippi Outfit, Carr’s ranching enterprise was part of the large scale ranching movement that lasted in South Dakota for 17 years. The treaty of 1889 opened Indian lands to white settlers for cattle grazing. The period of large scale ranching began to come to a close in 1907, when the Federal Government began to change its policies, restricting grazing land and leaving ranchers like Carr with smaller grazing lands and herds. The house stands as a reminder of one of Fort Pierre’s first economic systems, ranching.