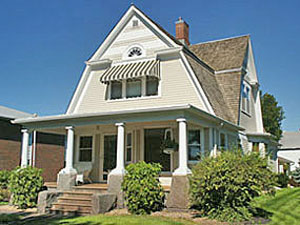 The Stephens-Lucas House, built in 1904 by Attorney L. L. Stephens, is a two-and-one-half-story cross gambrel Dutch Colonial, a popular style in South Dakota during the early 20th century. The house is one of the best examples of its type in the State. This style is demonstrated through the home’s large porch and Doric columns. The house shows the transition from the styles of the Victorian period to the refined modes of the revival of Classical designs. This is evident with the basic appearance of the house which is much more subtle than the Queen Anne, yet having elements uncharacteristic of the Neoclassical such as high pitched roof, an oriel, a bay window, and decorative wood shingles in the gable ends.

The first owner was L.L. Stephens, a prominent lawyer and land speculator. Stephens was mayor of Pierre from 1913 to 1915, and a State Senator from Hughes County in 1915. He was an attorney for several important clients including Standard Oil. Alfred E. Lucas bought the house in 1925. He was a founder, along with Emil P. Theim, of one of Pierre’s oldest and most important merchandise stores, the A. E. Lucas Co. Dry Goods, as well as a clothing store, Ready to Wear. Mrs. Clara Riehe, a relative, owned the house until Lucas’ son Robert H. Lucas and his wife Alma, who continued to run the family business, bought it in 1944. The house has remained in the Lucas family since 1925 and is currently owned by Janice and Tony Lucas.