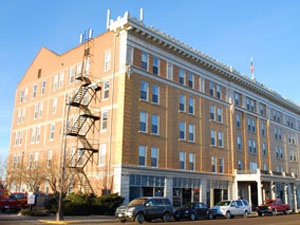 Built as the premier hotel in Pierre by prominent businessman Charles Hyde, the St. Charles Hotel was and has been since it first opened the most prestigious address in Pierre. Governor Vessey and Lieutenant Governor Byrne hosted the reception that celebrated the opening of the hotel in 1911. Until the completion of the governor’s mansion in the 1940’s, the St. Charles served as residence for a number of governors and many of South Dakota’s important political figures. Although some have said that Governor Vessey and his family made their home at the St. Charles, the 1910 census and 1910-11 Pierre City directory have him listed as living at 528 Highland Avenue next door to the John E. and Ruth Hipple House. 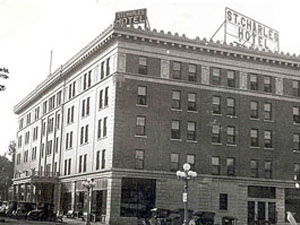 The St. Charles Hotel was the headquarters for the legislature, and all representatives and senators stayed there. It has been said that the hotel is where the laws were conceived. Legislators, lobbyists, and interested tourists gathered in the mezzanine and talked, argued, and decided on their bills. The building was also the scene of numerous political conventions and served as offices for the State. Calvin Coolidge, Governor Peter Norbeck, and Dale Carnegie were guests at the hotel. Not only politicians enjoyed the St. Charles while in Pierre. Bob Hope dined in the restaurant, and Clark Gable stayed there while on hunting trips.

The hotel is most famous, however, for its builder Charles Hyde, who helped found the city by erecting nine business blocks in anticipation of Pierre’s economic success. Later indicted for fraudulent advertising through the United States mail, Hyde became an extremely controversial figure until President Taft pardoned him. 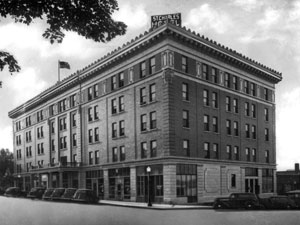 The St. Charles is a five-story rectangular block building made of yellow brick and trimmed with glazed terra cotta tile on the first and fifth stories. The building’s relatively flat surfaces are enlivened with Neoclassical motifs done in elegant white, glazed terra cotta. The overall appearance of the building is a pleasing combination of controlled proportions and simple, elegant details. The building known as Pierre’s most prestigious address now houses a restaurant and lounge on the first floor, offices and businesses on the first and second floors, and apartments on the upper three floors.