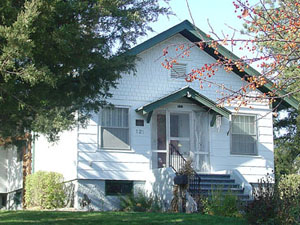 Kenneth R. Scurr designed this one-story wooden house, and the Onida Construction Company built it for him in 1923. Scurr was an important designer and builder involved in a number of noteworthy local projects. He moved to Pierre in 1920 and married Lucille Pettyjohn, daughter of Frank Pettyjohn, a prominent retailer and grain elevator operator.

As State bridge engineer, Scurr played a role in the Pick-Sloan Plan and Army Corps of Engineers’ Missouri River Development Project that called for the construction of rolled earth multi-purpose dams at Fort Randall, Oahe, Gavin’s Point, and Big Bend. He also had a hand in a series of very high and very long bridges which were more complex than any other engineering projects in South Dakota. He constructed the first bridge, Big Bend, during a severe winter using concrete poured into specially designed insulated forms that maintained the temperature required for the concrete to harden. This was the first use of such forms in winter construction. The new bridges built at Forest City and Mobridge were noteworthy at the time for being the longest bridges over any national inland waterway and for their low building cost.

Scurr received additional recognition for the design and construction of the Bad River Bridge at Fort Pierre, which was the first bridge in the United States to utilize welded stud connectors between the floor and girders. It was also one of the first structures poured under winter conditions using balsam wool insulating material. He also became influential in the Bridge Subcommittee of the American Association of State Highway Officials efforts to establish construction standards and specifications.

Scurr’s expertise was not limited to bridges. He also designed the stables for the Pierre Polo Club, Pierre’s Hyde Stadium baseball park, and helped prepare plans for the Pierre City Auditorium.

Scurr also had a notable military career in World War I, World War II, and the Korean War. In 1917, he served with distinction as an artillery officer in France, receiving the Purple Heart and other decorations. Someone made a statement about him that, “few South Dakotans have served their country and state so long and well as Col. Scurr.” Due to his distinguished accomplishments, both civil and military, he had the honor of induction into the South Dakota Cowboy and Western Heritage Hall of Fame.