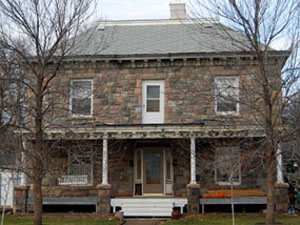 Built in 1907 by Walter Rowe, an important local figure, the Rowe House is an excellent example of the Folk Victorian style architecture that was prevalent in South Dakota between 1890 and 1910. This style is inspired by Italianate and Queen Anne designs with the main area of focus drawn from the porch or cornice line which accents the exterior portions of the building. The handsome stone house with a front porch across the front has a hip roof with a tin eave overhang with brackets. The building is also a fine example of the distinct use of cut stone in construction. It was one of the earliest homes constructed in a neighborhood of mostly one-story ranch style homes.