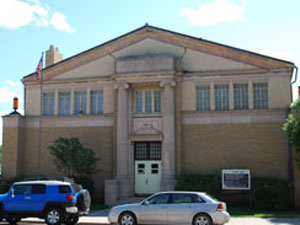 Located a block west of the Upper Pierre Commercial Historic District, the Pierre Masonic Lodge is important as the home of the Masons in Pierre since 1928 and also as a good local example of Neoclassical Revival style architecture. The lodge is three stories with a banquet room and lobbies on the first level, a lodge room and lounges on the second level, and balconies overlooking the lodge room and auxiliary rooms on the third level.

Masonic activity first occurred in what would become South Dakota in 1862 when the Grand Lodge of Iowa received a petition for a Dispensation for Dakota Lodge #1 at Fort Randall in Dakota Territory, but a charter was never issued. The first charter came with the formation of St. John’s Lodge #166 in Yankton a year later. The Grand Lodge of Dakota formed in 1875 following the formation of a number of lodges in the territory through dispensations from Iowa and Minnesota. When Dakota Territory became North and South Dakota in 1889, a Grand Lodge was formed for each new State.

The Pierre Lodge 27 A.F and A.M. held its first meeting in 1881. There were 14 petitions for membership. Only seven individuals were elected to receive the degrees. This selectivity shows that the lodge was only willing to accept members of the highest moral quality. The locations of the first meetings in Pierre are not known, but beginning in 1884, meetings took place at the First National Bank building. In 1928, the Masonic Temple was constructed and has served as the lodge’s home since. 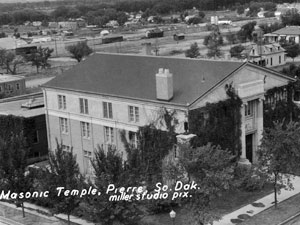 Sioux Falls architects Robert Perkins and Albert McWayne designed the Pierre Masonic Lodge in 1927. Perkins and McWayne was one of the finest architectural firms in South Dakota with commissions for government and commercial buildings as well as residences. Perkins received his B.S. degree (1908) in architecture and a M.S. degree (1917) from Armour Institute of Technology (IIT) in Chicago. He lived in Sioux Falls from 1912 and 1916 and had his own practice before going back for his master’s degree. McWayne received a B.S. degree in civil engineering from Purdue University in 1910. After working in Chicago as a construction superintendent for Holabird and Roche and architect Grant C. Miller, he moved to Sioux Falls, South Dakota in 1916 and formed a partnership with Joseph D. Livermore, which ended in 1918. That same year, McWayne and Perkins established their partnership, which lasted until 1954 when Perkins died.

With few modifications, the building is a good example of Neoclassical Revival architecture for a service organization building. The fluted ionic columns, the pediment over the symmetrical façade, multi-pane windows, and decorative relief below the eaves and above the entry are defining features.