North Grand from Broadway to Elizabeth 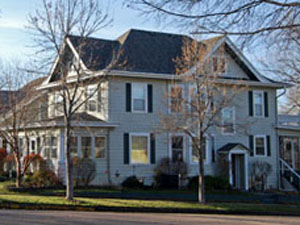 Located north of the downtown business district and three blocks west of the State Capitol on a rise overlooking the Missouri River, the Pierre Hill Residential Historic District is the prominent residential district in Pierre. The district is a chronicle of late 19th- and early 20th-century architecture, showcasing homes designed in regional vernacular adaptations of popular architectural styles. The neighborhood also reflects the State and local social and economic trends that shaped it. Adding to Pierre Hill’s historic charm are the numerous shade trees, perennial gardens, hillside grading, unfenced yards, and picturesque retaining walls that make this late 19th- and early 20th-century park-like neighborhood an ideal place to live.

Because Pierre was not settled until 1880 and was largely isolated, architectural styles tended to be adopted much later and remained popular long after the rest of the country had moved on to newer, more popular trends. Most of the homes in the district are bungalows of the Prairie School and Craftsman styles. Many homes are in Late Victorian styles, and Minimal Traditional homes built after World War II are also common. Early 20th -century period revival and Foursquare homes with period revival and Prairie School decorative details can be found throughout the district as well. Most of the homes feature materials typical of central South Dakota during the period including concrete or stone foundations, wood frames, clapboard or stucco, fieldstone retaining walls, and wood or asphalt shingles.

Pierre sits on the bluffs along the Missouri River on a series of natural terraces. A promotional brochure published in 1889 described how it developed, “The business is conducted upon the lower plateaus; on the next are homes, schools, churches, and public buildings; and the higher are reserved for residences more costly and commanding more extended views.” Early deeds for the higher lots intended for the city’s more costly residences often included covenants restricting land use and requiring the planting and maintenance of trees. 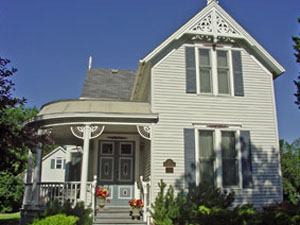 The Hinsey House at 337 North Grand Avenue is an example of Queen Anne architecture.

During the 1890s, people began to build homes on the highest terrace view lots in the district. Early residents were members of Pierre’s business and professional class. The majority of the district’s Late Victorian type homes, influenced by the Queen Anne and other picturesque styles, date from this first phase of building. The Hinsey House at 337 North Grand Avenue is an example of Queen Anne architecture. The district also contains homes in late 19th-century revival styles. Notable from the district’s early years is the Burton Cummins House, a grand Colonial Revival home with an elaborate wrap-around porch and widow’s walk at 503 North Euclid Avenue built for banker Burton Cummins and his wife, Clara Belle, in 1895.

Building in the district slowed dramatically after the Panic of 1893, a serious economic depression in the United States, and did not really begin again until after 1900. Charles Hyde had just moved to Pierre and became the most influential figure credited with the district’s development during this period, as he was for the development of most of the Upper Pierre Street Commercial Historic District. His son, Franklin, manager for the Hyde Holding Corporation, and his wife Enid purchased their home, the L.L. Schaaff House, a side gable Craftsman bungalow at 517 North Grand Avenue.

From 1900 to 1912, the Pierre Hill District was known as “the Hill.” An address on “the Hill” was a sign of prestige for the city’s business and professional elite, who considered the hill’s location above the city, away from saloons and society’s rougher elements, out of danger of the flooding, and near churches and good schools to be an ideal place to raise a family. Most of the homes from this period are larger and of high style architecture. Victorian forms remained in favor, but decorative detailing moved away from the picturesque and toward the revival styles, with some homes exhibiting an eclectic mixture of the two. The Colonial Revival and Neoclassical styles became a popular statement revealing the social stature of residents. 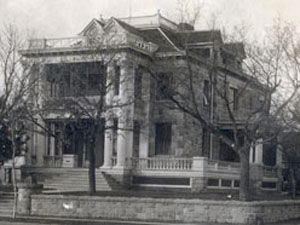 A.W. Ewert, a Pierre banker, constructed the Neoclassical mansion at 339 North Euclid Avenue from 1905 to 1910.

A.W. Ewert, a Pierre banker, constructed the Neoclassical mansion at 339 North Euclid Avenue from 1905 to 1910. In 1890, Ewart began his career as a cashier at the National Bank of Commerce, where he proved himself as an executive officer and did much to further the interests of the institution. He was mayor of Pierre from 1892 to 1896, with a reputation for directing the city’s affairs scrupulously and with the strictest business principles. He later became a State senator and later State treasurer. He was treasurer of the Rural Credit Department from 1917 to 1927 and was involved in an embezzlement scandal during that era of wide-spread farm foreclosures and bank failures.

Other notable homes from this period are the elaborate Colonial Revival Farr House at 106 East Wynoka Street and the Merrill-Schaaff House, a Foursquare with Colonial Revival features at 400 North Grand Avenue. This house, owned by Judge Charles S. Whiting, was built in 1908 as a spec house by Leslie Schaaff and John C. Merrill of the Merrill-Schaaff Lumber Company. Whiting was judge of the State’s ninth judicial circuit court, and his second wife Eleanor was the Corresponding Secretary of the Pierre Political Equality Club. The Dr. Charles M. Hollister House at 402 North Huron Avenue is a Prairie style home built in 1910 for Pierre physician Dr. Charles Hollister. The owner following Dr. Hollister was physician and surgeon Dr. T. F. Riggs, for whom Riggs High School is named. The Prairie style is identified by wide overhanging eaves, cornice and façade detailing that emphasize horizontal lines, and massive square porch supports. 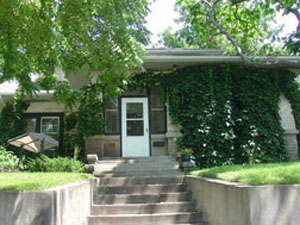 As the 1920s approached, simplified house forms and the American Foursquare and bungalow came into fashion, documenting the influence of the Arts & Crafts movement. When the United States entered World War I in 1917, Pierre became the administration center for numerous war related activities. Despite high living costs and inflated prices, the demand by State, Federal and county government employees for fine homes did not subside. Between 1918 and 1928, new homes were primarily Craftsman and Prairie style bungalows and Period Revival houses that derived elements from earlier styles, such as the Colonial or Tudor Revival. Builder service and plan-book type designs replaced the large and elaborate architect-designed homes favored earlier in the century. The 1925 Colonial Revival Miller House at 519 North Huron Avenue is from a prize-winning Good Housekeeping Magazine design. The home belonged to Dick Miller, the owner of the Miller Photography Studio in Pierre. He paid off the mortgage on his home with prize money won with a photograph of his daughter Marilyn in the “America’s Most Beautiful Baby” contest Sears Roebuck sponsored and held at the Chicago’s World Fair in 1934. This period of development also illustrates the rise of the automobile as many of the homes feature attached garages, like the Miller home, or detached garages to match the house such as the one at the L. L. Schaaff House at 517 North Grand Avenue. 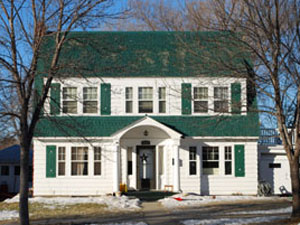 Construction on “the Hill” came to a halt in 1929 with the beginning of the Great Depression but resumed in 1936. By this time, people were building in a more moderate style, Minimal Traditional, which kept early 20th century forms but lacked their decorative details. Homes at 330 North Grand and 122 West Broadway reflect this style. The post-war Minimal Traditional homes placed greater emphasis on the attached garage and reflected the renewed prosperity of the post-war period in the use of materials like brick and decorative stone.

Due to central South Dakota’s harsh climate, enclosed porches and foyers are common in Pierre Hill homes. Period Revival and Minimal Traditional cottages tended to have projecting, enclosed foyers, but many of the earlier Late Victorian houses and early 20th-century bungalows originally had open porches that were later enclosed.