In 1903, local Reverend C. Frank Vreeland wrote to steel magnate Andrew Carnegie requesting a $15,000 donation to construct a public library. Carnegie, who believed that a public library was the most important benefit a community could provide to its citizens, offered the city $10,000, contingent that the city furnish a suitable site and pass a resolution promising to monetarily support the operation of the library. Citizens of the county voted to donate a piece of land just east of the courthouse while the city agreed to contribute $1,000 a year for operation.

Several architects submitted designs for the library, with the city selecting Wallace L. Dow and Son of Sioux Falls. The Neoclassical design selected was popular at the time with Dow and Son designing similar libraries for Yankton (1903) and Mitchell (1904). Although of similar design, Pierre’s library would be unique in its use of local prairie granite. A façade dominated by a giant portico, roof supported by classical columns and a central entry with symmetrical façade also helped identify it as Neoclassical in style. 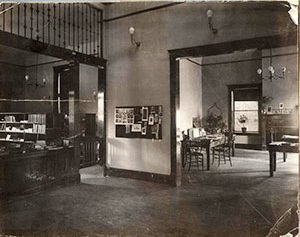 Local contractors Clow and Stainer were chosen to construct the library. Their winning bid was $12,151. With only $10,000 granted to the city by Carnegie, Clow and Stainer agreed to remove the heating and plumbing from the bid, with the agreement that it could be added back in if additional funds could be obtained. Carnegie agreed to donate an additional $2,500 and the building was mostly completed by June of 1904.

In 1994, workers removing paint from the decorative cornice with torches started the building on fire. With the building sustaining severe fire and water damage, the city demolished it in 1995.

The Carnegie Library was one of the few Neoclassical buildings built in Pierre and its loss greatly detracts from the architectural history of the area.