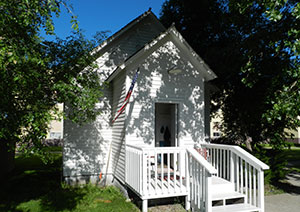 Sansarc School built in 1910 and used actively as a school until 1969. Purchased and moved to Gene Stoeser ranch in 1973. Gene then brought schoolhouse to Ft Pierre to be used as a museum in 1975. Restoration of roof and interior in 1999 to prevent deterioration of building by Verendrye Museum and Stanley County School Board, guided by Gene Stoeser and Mary Beth Stoeser Fravel. The original teacher cottage built next to the school and used actively until 1969, and original swing set were located in April 2014. In 2014, Deb Stoeser Schiefelbein guided cleaning, furnishing, improving appearance and functionality of building, and it was open as an interpretive museum in June 2014, thereby the Sansarc Country School Museum.

In the original location on Sansarc Road in northern Stanley County, the teacher cottage next to the school was 17 feet wide and 20 feet long. It had three rooms: a living room with heater, a kitchen with sink and stove, and a bedroom. There were 6 windows, and one entrance door. The bathroom was one of the two school outhouses. 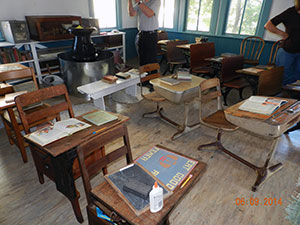 The one room school is 18 feet wide and 23 feet long and has 6 windows on South and 2 windows on East, a front entry with interior door and transom window to the room and outside entrance. The entry is used for hanging coats, storing water cooler, keeping balls and bats, lunch pails, boots. In the school there was a potbelly stove in the rear that used wood and coal, and later an oil stove. There was a cistern near the front entrance, dipping a bucket to get the water and eventually using a hand pump, and flagpole between the two buildings. Phone service began in 1960.

Books from 1st to 8th grade curriculum, maps, globe, teaching aids, and blackboards are in place. On the walls are framed pictures of Presidents Lincoln and Washington, Lord’s Prayer, The Lord, YCL (Young Citizens League) banner and certificates.

The school was also used as a polling site and has the original ballot boxes. 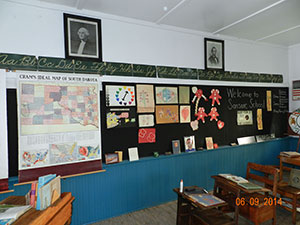 The first Sansarc school house was built along Sansarc Creek. There were Sans Arc Indian tribes in the area of Cheyenne River. Sans Arc can mean “no bow” or “unmarked arrows”. The Sans Arc Indians did not mark their arrows so they would all share the meat, rather than have all the meat go to only the brave who killed the bison. It is also thought they used spears instead of bow and arrows.

The Orton School Bell made its first public appearance in Fort Pierre during the 4th of July parade with the unveiling happening immediately after the parade at the Sansarc Country School Museum behind the Log Cabin Visitor Center.  School children and others will have the opportunity to ring the bell when visiting the Sansarc Country School Museum. 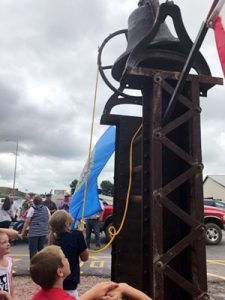 During the fall of 2017, Brandon Vevig removed the bell from the Orton School at Mission Ridge and delivered it to the Brian Scott residence on Bad River for preparation of the structure that would support the bell.  A concrete base and iron structure from the White River 1907 Bridge Beam (donated by Bob & Elsie Bak of Bak Construction) was perfectly detailed.

In 1925, the large bell (800#) was placed atop the Orton School in Mission Ridge where it rang every morning to indicate the starting of the school day until 2015 when the school was officially closed.

The Orton School is approximately forty-five miles northwest of Fort Pierre, SD, on Highway 1806, which is an oiled road, and then the last ten miles is gravel.  The present Orton School was moved in 1952 from West Orton to East Orton in order to accommodate the entire community, since East Orton was too small.  It was moved and remodeled by Robert Hutchison Contractors and again remodeled and enlarged in 1975 by Glover Construction.  From 1916-2009 approximately 202 people have attended East or West Orton Schools.  There were 60 teachers at the school with some of them being former students.  The school building has been used for all community projects such as Church, Elections, Parties, School Programs, Weddings, Funeral luncheons, and Picnics.  Its present address is Mission Ridge, SD. 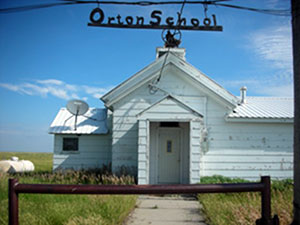 The school building had white wood, was 32’ x 35’ with two 8’ x 10’ bathrooms, five windows with two panes, three entrances, and one classroom.  The roof was asphalt shingles but the original shingles were wood and in 2006 some of the shingles were replaced with metal.  Electricity was installed in 1957, and the telephone in 1961.  There were originally two outside toilets and a barn.  The playground equipment included swings, giant stride, baseball and basketball.  The Teacher-age was upstairs with two entrances, inside and outside; and then in 2006 a new mobile home was used.  The steel flagpole was approximately 20’ tall and is located at the southeast corner of the schoolhouse.  The basement under the new addition has two entrances, contains gas furnace, cupboards and gas range.

In 1907, Crazy Woman Flat was the original name of the community known as Orton Flat.  It believed this name was given because of the many homesteaders who came and left because of the hardships, which they could not endure.  One instance which is told of a woman homesteader coming out of her shack in a long dress and stampeding a herd of cattle, which was being moved.    Henry Angel, who was with the herd, said “A crazy woman, GOD, a crazy woman.”  Mrs. Babcock, a homesteader, whose maiden name was Orton, had the first Post Office and thus the community received the name Orton.  Orton #8 was the name and number of this school district for many years.  In 1976, the County of Stanley took over all the schools and it became number 57-1.

The Sansarc Country School Museum and Orton School Bell is currently located behind the Log Cabin Visitor Center in downtown Ft Pierre; ask for a tour by calling 605-223-7603.