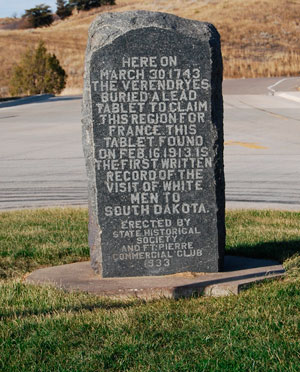 The Verendrye Monument, on Verendrye Hill overlooking the city of Fort Pierre just northwest of where the Bad and Missouri Rivers come together, is one of only a few verifiable sites associated with the first Europeans to explore the northern Great Plains region. Frenchman Pierre Gaultier De La Verendrye and his sons explored the interior of North America in the 18th century. In 1742, Francois and Louis-Joseph Verendrye embarked on an expedition to find a water route to the Pacific Ocean. Though the Verendryes’ epic achievements were dismissed as a failure in their time because they found no Northwest Passage to the Pacific, this site documents their undisputed role in the French effort to achieve colonial dominance in North America.

The Verendryes penetrated further into the heartland of North America than any previously known European explorers. They reached the area in South Dakota where Pierre and Fort Pierre are now located 61 years before Meriwether Lewis and William Clark first arrived in the area. At the end of March, 1743, after visiting with local Arikaras, they buried a lead plate at the site to lay the basis for French sovereignty on the upper Missouri, seeking to establish French control of the entire Mississippi River drainage.

A group of school children playing on the hill found the lead plate in 1913. They noticed a small part of the plate protruding from the ground, dug it out, and carried it into town. They were about to sell it to a local print shop, because it was made of lead. Fortunately, someone contacted State Historian Doane Robinson, and he saved the plate.

The inscription on the plate translates: “In the twenty-sixth year of the reign of Louis XV, the most illustrious Lord, the Lord Marquis of Beauharnios, 1741, Pierre Gaultier De La Verendrye placed this.” Scratched on the back are the words: “Placed by the Chevalier Verendrye, Louis La Londette, and A. Miotte. 30 March 1743.” 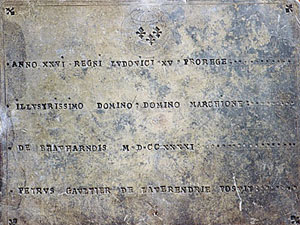 The Verendrye Monument overlooks a major southeastern bend in the Missouri River that offers dramatic views to the north, east, and south. This section of the Missouri is one of the few that has not been greatly disturbed by dam and reservoir construction. The Verendrye Monument is a granite marker about 4 feet high on which is engraved the following legend: “Here on March 30, 1743 the Verendryes buried a lead tablet to claim this region for France. This tablet found on Feb. 16, 1913, is the first written record of the visit of white men to South Dakota.”