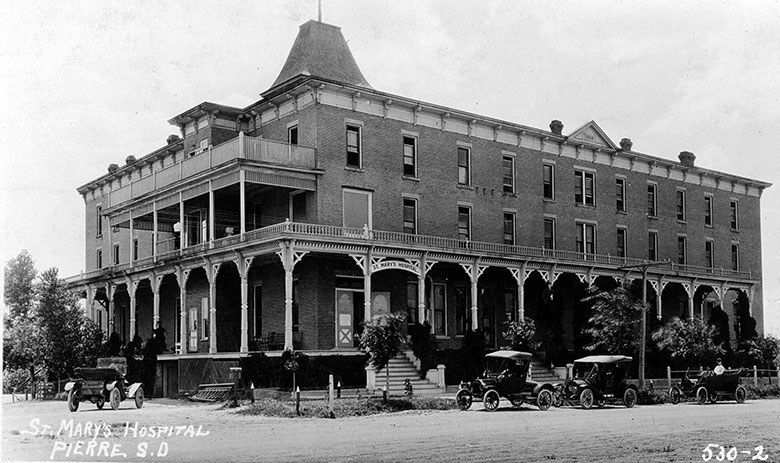 In 1882, Dr. D.W. Robinson, a recent graduate, was in route by train to the Pacific Coast in quest of practicing medicine there. However, his life was about to take a twist. He was misled by the railroad folder and found himself stranded in Pierre at the end of the railroad without any means to travel west. After explaining his situation to an elderly man at the train station he was told, “you come down to my hotel, and I’ll find you some patients.” With that he laid the foundation of his career and that of the state’s central foremost medical center. It was a primitive site for a hospital and it lacked basic furniture and equipment. Robinson performed operations on kitchen tables, ironing boards and floors.

Pierre was desperately in need of a school. The community fathers approached several orders of Sisters in an attempt to get a school opened. The fathers’ requests were rejected time and time again. These Sisters had no desire to open a school in such a bleak and desolate area.

God did indeed present the Sisters with challenges. The Park Hotel, built fifteen years earlier, was chosen as the new school site. Since the Hotel’s existence it was unoccupied for several years. The occupants had taken almost everything with them when they left. During these vacant years the only “guests” of the hotel were various animals and birds.

“What a sight, enough to discourage the Sisters,” Sister Alphonsa stated. “Nothing was in the house – no beds, no dishes, and no furniture. Dust, dirt and spider webs were the decorations. They started to scrub and clean to have a few rooms ready when Sister Catherine, our Superior, would come. The people brought cots from town. From a pile of rubbish in the backyard, we salvaged spoons, forks, knives, pitchers and plates. These we scoured and used.”

It was so filthy from the critters and river sand that they could not tell what color the woodwork was. However, the Sisters refused to be discouraged. The Mother Superior was coming in a few weeks, and they did not want her to see the “school” in its current state. These five brave Sisters began working to clean the Park Hotel up as soon as they arrived. Mary Woods was the first white baby born at St. Mary’s on December 9, 1899. The first operation, on January 16, 1900, was performed on the first operating table donated by Dr. Robinson. Pneumonia, typhoid fever, and small pox were prevalent during the early years. The south wing of the hospital was used as an isolation unit. Although the staff worked diligently at preventing diseases and treating patients, they were not able to keep diseases at bay. Three of the Sisters died of typhoid fever in 1905 and pneumonia consumed Dr. Robinson five years later.

Dr. Theodore Foster ( T.F.) Riggs had been practicing at St. Mary’s a year before Robinson’s passing. He and five other physicians continued to lead the pioneering spirit for central South Dakota. After years of studying at Johns Hopkins University and the Mayo Clinic, Riggs had returned to his homeland, to devote himself to his people. “I belonged to this state and its people by birth,” said Riggs. “I just came home.” Riggs is commended for upholding the Moral Code of Medical Ethics and for attributing to the accreditation of St. Mary’s Hospital. By 1999 modern technology and medicine have come a long way from the humble beginnings in 1899. Cures for diseases have been found; medicine is readily available to treat illnesses; and cell phones, pagers and computerized equipment make it possible to communicate instantaneously. St. Mary’s continues to provide quality health care and to stay on the cutting edge in advanced medical technology in serving the people in central South Dakota.

St. Mary’s was owned by Catholic Health Initiatives (CHI) based in Denver. CHI was the largest Catholic, not-for-profit healthcare system in the country. CHI and St. Mary’s share the same Core Values: Reverence, Integrity, Compassion, and Excellence. As Pierre’s largest privately owned employer, the hospital facility believes in supporting the surrounding community. In 1999 alone, St. Mary’s contributed over $3.6 million in charity care and support to the service areas through various community benefits and services.