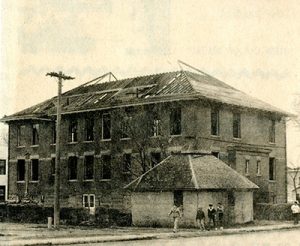 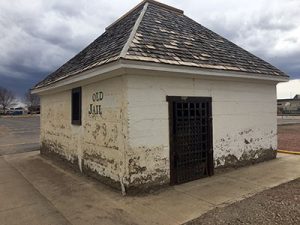 An unusual circumstance occurred in 1921 as documented from an excerpt in the Pierre Capital Journal, December 17, 1921.

“Many residents had the opportunity to view a full grown mountain lion which is being held in the Fort Pierre Jail as a result of a trip taken by Andy Leonard and Hugh Schultz to Kalispell in the Judith Basin of Montana.  They were there selling buffalo for butchering and managed to return to Fort Pierre with a mountain lion.

The rancher who bought the buffalo told them that for $25 he could guarantee them a mountain lion.  The deal was agreed to and the rancher and his Airdale dogs went to complete the deal, treeing the lion.  A wire loop was thrown about the cat’s neck nearly choking it until it fell out of the tree, then it was secured, crated and taken to the railroad station where is was shipped to Fort Pierre.

If the lion was a ferocious wild one, it became quickly settled and acted as wild as a pet house cat.  Some who have observed it claim it purrs, stretches and plays just like a cat — although it is a wild animal and beautiful!  Andy Leonard intends to send it to the Longfellow Gardens in Minnehaha Park in Minneapolis, Minnesota.”