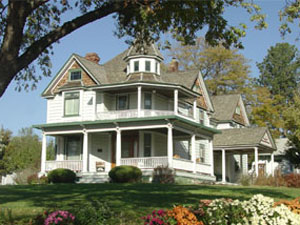 The Crawford-Pettyjohn House is a two-story Queen Anne. Its Queen Anne features include a hip roof with cross gables, asymmetrical façade, full-width porch that extends along the south and east sides, decorative shingles in the gables, a turret in the corner, and turned balusters on the porch. The foundation is made of glacial stones collected in the area and also incorporates a large unmovable boulder. Originally constructed in 1885, the house underwent a rebuilding project in 1908.

The Crawford-Pettyjohn house is one of the best examples of Queen Anne architecture in Pierre. The original owner, Coe I. Crawford, lived in the house from 1885 to 1896. He was the State attorney general from 1893 to 1897. Crawford was elected governor in 1906 and began to institute major reforms in the next election including a direct primary, anti-lobbying legislation, and controls on campaign contributions. Two years later, he successfully defeated A.B. Kitteridge, the leader of the Stalwart Republicans, and became a United States senator. 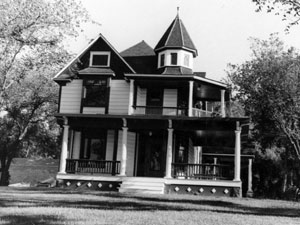 Robert S. Vessey succeeded Crawford as governor. He is thought to have lived in the house while in office from 1909 to 1913, although the 1910 census and 1910-11 Pierre City Directory have him listed as living at 528 North Highland Avenue.

Unfortunately by 1966, the house had been allowed to deteriorate into an almost ruinous condition. The home was restored in 1969 by the Neilan family.

Coe Isaac Crawford was born on January 14, 1858 in Volney, IA. He grew up on a farm, and only attended school for three months during each winter. At age 15, he left home to attend a full time school in Rossville, IA. He boarded with a d

octor who offered Crawford additional educational instruction. After teaching a couple of years, he enrolled at the University of Iowa and earned a law degree in 1882.

Crawford moved to Pierre in 1883 and lived at 129 S Washington St.  He opened a law office despite being broke. He was elected Hughes County States Attorney in 1886. He was a member of the last territorial and first state legislatures. He was responsible for many of the State’s first bills. As Attorney General from 1893 to 1897, he prosecuted former state treasurer W. W. Taylor, who had absconded with the state treasury. He was an unsuccessful candidate for Congress in 1896. Crawford moved to Huron to become the attorney in South Dakota for the Chicago & Northwestern Railway in 1897 and remained as such until 1905. He lost the Republican nomination for governor in 1904 to Samuel H. Elrod, but then defeated Gov. Elrod it in 1906. Crawford won the November election over Democrat John A. Stransky and became the state’s first Progressive governor.

There was much progressive legislation passed during the Crawford Administration. The most notable of these reforms included the direct primary law, lobbying reforms, legislation that mandated public accounting of campaign funds and prohibited corporate contributions for political gain. There were also important railroad reforms such as passenger rate regulation, and anti-pass legislation. As head of state, Gov. Crawford officiated the laying of the Capitol’s cornerstone in 1907.

Crawford chose not to seek a second term, but instead ran for the U.S. Senate. He won the Republican primary, and gained nomination to the Senate by the Republican controlled State Legislature. Crawford served one term in the Senate starting in 1902, losing his re-election bid in 1904 to Charles H. Burke. He returned to Huron in 1912 and resumed practicing law.