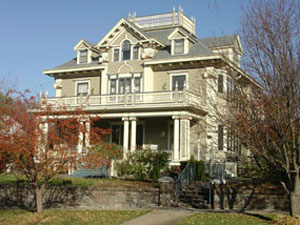 Built in 1904, the Farr House is a handsome example of an uncommon centered gable home in the Colonial Revival style. This style mimics high-style Georgian or Adam prototypes. The house is distinguished by the high quality of workmanship throughout and is also significant for its associations with several important citizens of Pierre.

Designed by Architect E. J. Donahue of St. Paul, Minnesota, the home features elaborate exterior ornamentation, including a full length front porch with Ionic columns, massive two-story Ionic pilasters, Palladian windows, and a dentil cornice with modillions. The interior contains an original mural by Y. Edward Soderberg, which serves as a frieze in the dining room. The canvas wall painting and the original maple floors have been restored.

Colonel Farr was a Civil War veteran who came to Pierre to assume the vice presidency of the National Bank of Commerce. His wife, Dr. Mary Noyes-Farr, was an osteopathic pioneer physician and one of the first woman doctors in Pierre. Dr. Farr originally planned to use the house as a hospital. 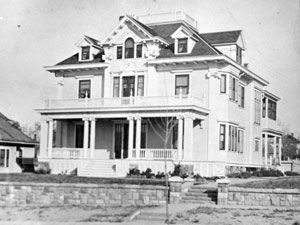 Governor Peter Norbeck, South Dakota’s ninth governor, lived in the house from 1917 to 1921. He went on to become a United States senator from 1921 until his death in 1936. Norbeck’s vision led to the creation of Custer State Park in the Black Hills. He was also responsible for the building of a state-owned cement plant, a workman’s compensation law, and hydro-electric and road development. His senatorial career reflected his concern for wildlife conservation and park development. Norbeck was influential in the naming of the Badlands as a national monument and is credited with the inclusion of Teddy Roosevelt’s image on Mount Rushmore.

Governor Gunderson also resided in the home for a brief period. The house was converted to apartments in 1946, a complete restoration was started in 1993, and now the house is an operating bed and breakfast establishment.

Ana and Rick Jensen, are the Innkeepers of The Norbeck House Inn Bed & Breakfast.