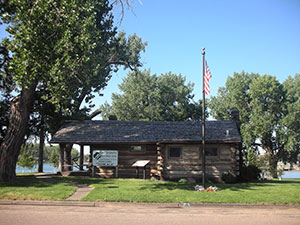 The log building that eventually became the Girl Scout Cabin in Steamboat Park was constructed in the early days of Pierre. No exact date has been pinpointed, but it is believed the cabin was built prior to 1889. Harold Schuler recorded in Pierre Since 1910 that the cabin was originally owned by a man known as Swede John, who was a driftwood collector. Swede John sold the cabin to “Long” Frank Caldwell in about 1889.

According to early Pierre resident Robert Hipple, Caldwell was a woodcutter. He would row out into the river whenever a log drifted past, secure it to his canoe, and then haul it onto shore to be cut up. A July 1976 article in the Pierre Weekly newspaper on the cabin also reported that Caldwell had other business interests, as men cleaning the cabin in 1929 supposedly found a still underneath a trapdoor. 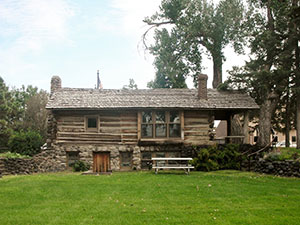 It is not known what happened to Caldwell, but it is believed the City of Pierre acquired the cabin in 1928 when it purchased all the waterfront land between what would become Griffin Park and the railroad bridge. The city gave the cabin to the Girls Scouts in 1929. The cabin was remodeled in 1930. Among the changes to the cabin believed to have occurred during the 1930s are the removal of the lean-to, addition of a porch, construction of a stone fireplace, and the addition of a gable roof. Some of this work may have been done in coordination with the Works Progress Administration.

The Scouts named the cabin Tichicala (pronounced Tee Chikala), Dakota Sioux for “The Little House.” This name was in contrast to Ti Tanka, “The Big House” of stone built at Farm Island in 1935 for the Girl Scouts.

Through the years, the cabin has been the site of day camps, overnight camping for local and out-of-town troops, meeting space, Council gatherings, Brownie fly-up ceremonies, and troop cookouts.