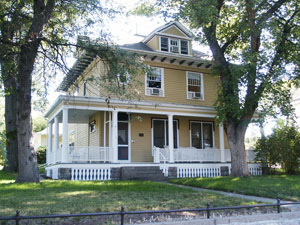 The so-called “Goodner” house was actually built by Henry J. Siems. Henry & his wife arrived in Pierre in 1881 where he started a wholesale liquor business. Active in the Pierre business community, when the Pierre City government was formed in March of 1883, Henry was elected alderman in the second ward. Henry purchased the house’s lot for $700 in 1884 and built a one and a half story house. Apparently Siems left Pierre in 1892. In the spring of that year Mrs. Siems sold the house to Colonel Ivan W. Goodner for $3500 — with an assumed mortgage of $3000.

Originally designed in the Gothic Revival style, the Goodner House underwent a major transformation in the early 1900’s that changed the style to Colonial Revival. The change also added a full second story and attic with three gabled dormers and columns. The changes to the house reflected the Goodner family’s need for added space as well as a significant modernization to a newer architectural style. 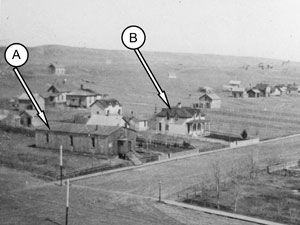 Design elements of the Colonial Revival style include the asymmetrical façade, large wraparound porch with simple Tuscan columns, multiple-pane windows, and plain railing with spindles. This is considered one of Pierre’s oldest homes.

Over the years Goodner held many positions — he was the official reporter of the debates of the South Dakota constitutional convention in 1885 and 1889, the first clerk of the Supreme Court, city attorney, and state’s attorney for Hughes County from 1900 to 1904. In 1901, he received an appointment to the State Board of Regents of Education by Governor Charles N. Herreid later becoming president of the board. Goodner was both a trial lawyer and a counselor.