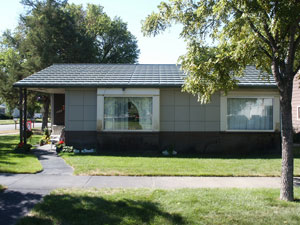 This house is a two-bedroom Westchester Deluxe model Lustron house built in 1949. This all steel home was mass produced by the Lustron Corporation to help with the housing shortage after World War II. The exterior and interior walls are of shiny procelain-enameled panels. The house is one of the two Lustron homes in Pierre — 38 were built in South Dakota; all survive today.

Lustrons are made of steel and are significant illustrations of the types of homes built in the United States to meet the housing shortage after World War II. The steel house is 31’ by 35’ set on a concrete slab foundation. The exterior is clad in 2’ by 2’ gray porcelain-enameled steel panels. The bottom row of panels and the entry have been painted brown.

The post-war housing shortage in Pierre was exacerbated by construction of the Oahe Dam, largest of the four Pick-Sloan Plan dams constructed in South Dakota after WWII, Oahe was were part of the Pick-Sloan Missouri Basin Program to conserve, control, and use water resources in the Missouri Basin. The influx of workers between 1948 and 1953 increased Pierre’s population from 5,000 to 10,000. Naturally this growth created a need for housing. Pierre’s two Lustron houses date from this time;

Carl Strandlund founded the Lustron Corporation in hopes of building enameled steel gas stations but quickly converted his idea to apply to the housing needs. Lustron homes came in three models: the Westchester (standard or deluxe, the most popular model), the Newport, and Meadowbrook. All exterior and interior surfaces of the houses and garages were made of enameled steel, which made them durable and easy to maintain while giving them a sleek, modern look. A ceiling radiant system heated the homes. Built-in features in the Westchester Deluxe model included storage units, a master bedroom vanity, a china cabinet with a pass through from the kitchen, a combination dish and clothes washer, and a bay window. Prefabrication and construction methods the company developed made it possible to build a Lustron house in one to three weeks. The company constructed a total 2,500 houses total before being forced into bankruptcy in 1950.

These homes are owned by Ann and Don Davisson.