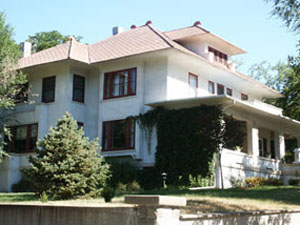 Built near the State Capitol Complex in 1913 for locally prominent citizens John and Ruth Hipple, the Hipple House is important for its association with them and also as an excellent example of the Prairie style. With a low-pitched roof, wide overhanging eaves, two-stories with a one-story porch, and details emphasizing horizontal lines, the house incorporates important elements of the Prairie style.

John E. Hipple moved to Pierre in 1888 and organized the State Publishing Company. Five years later, he sold his interest in State Publishing and started the Hipple Printing Company. In 1905, Hipple purchased the Weekly and Daily Capital Journal. Hipple gets credit for many improvements to the City of Pierre, while he served as mayor from 1924 to 1939. During one of his terms, the city purchased several outlets from the Chicago and North Western Railway. This land included almost two miles of Missouri River front property, which became Steamboat Memorial Park in 1974. Hipple also convinced Civilian Conservation Corps officials to locate a camp on Farm Island. The Civilian Conservation Corps built two public picnic areas, gravel roads, and cabins for the Boy and Girl Scouts and the Izaak Walton League.

Ruth was asked to be a candidate for superintendent of public instruction on the Prohibition ticket, but she had no political ambition and declined. She also started the Girl Scouts in Pierre.