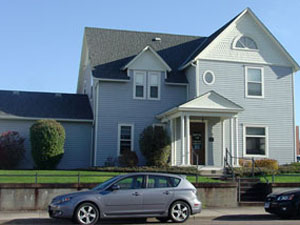 Built by H.R. Horner in 1889, the Horner-Hyde House is associated with two important citizens of Pierre, Henry Horner, who built the house, and Charles Lee Hyde, a member of the locally prominent Hyde family, which had such an influence on the development of the area.

The house is a large, impressive two-and-one-half story Queen Anne with ornate details such as a cross-gabled roof, delicate decorative detailing and shingles in the gables, one-over-one windows, and a bay window on the east façade. The interior of the home contains a unique granite fireplace made entirely from a single boulder. The Horner-Hyde House sits on a hill overlooking the notable historic commercial area of Pierre, the Upper Pierre Street Commercial Historic District.

Henry Horner, a 27 year-old attorney, moved to Pierre in 1881 and quickly became one of the leading citizens of the city and county. Horner and L.W. Wakefield founded a law firm and were active in local Republican politics. Horner later formed a partnership with Robert W. Stewart that became one of the best-known firms in the territory. The firm still exists today as May, Adam, Gerdes, and Thompson and is the oldest law firm in the State. Horner was also the official reporter for the State Supreme Court from 1898 to 1913, invested heavily in both commercial and residential real estate, and was one of the founders of Pierre National Bank — now BankWest. Elected to the State Senate in 1892 and 1896, he served as chairman of the committee on railroads and was a member of the Judiciary, Public Printing, Apportionment, Public Health, and Immigration standing committees.

Charles (Charley) Hyde was the son of the notable Charles Hyde who developed much of Upper Pierre Street. The Hydes became one of the wealthiest families in the State. Charles managed the family’s farms and other extensive real estate holdings. During the 1930s, he bought distressed farms and sold them back to the original owners on an easy contract. He also managed the Grand Theatre in Pierre and served as State director of the Theatre Owners Association of America. He expanded his father’s holdings and was responsible for constructing or financing many of the commercial ventures in the city. Going into politics, he was elected to the State Senate on the Republican ticket in 1928 and 1930 and in 1942 to the State House of Representatives.

While a legislator, Charley Hyde was very active promoting child welfare, agriculture, commerce, and highway and aviation improvement. Over the years, he was a member of the Agriculture, Banks and Banking; Child Welfare; Highways and Aviation; Incorporations; Capitol Buildings and Grounds; Federal Regulations; Military Affairs; Apportionment; Mines and Mining; and Indian Affairs committees. He also chaired the State Board for the Rehabilitation of the Blind under four governors. A committeeman for the Boy Scouts of America for 22 years, he helped organize the Pierre Boys Club. In another demonstration of his commitment to helping young people, he hired local farm boys and provided them with living quarters as they attended high school in Pierre. Because of his contributions to the community, Hyde received the first “Pop Warner Worker of the Month” award for outstanding volunteer work. The Dakota Sioux Tribe adopted Hyde as an honorary chief in 1937. He was a life member of the State Historical Society.

The home was purchased and restored by Dr. Doug Beemer in 1989, and is currently in use as his professional office.