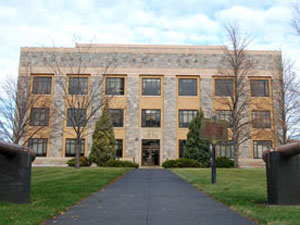 The Hughes County Courthouse was designed in the Public Works Administration Moderne style with Art Deco features by the architects Hugill and Blatherwick and constructed by the Henry Carlson Company, all out of Sioux Falls. This governmental interpretation is a simplified version of the exuberant Art Deco style that appealed to a nation in the midst of the Great Depression. The uninterrupted square massing of the building and vertical bands of windows separated by decorative-patterned brick spandrels provide the only historical references to the style. The building’s utilization of Art Deco and Moderne design elements is typical of South Dakota’s county courthouses constructed during the period. While the building’s level of architectural detail is minimal by many standards, the courthouse remains a relatively large and visually striking example of architecture in Pierre and Hughes County and the seat of county government.

Work on the new courthouse began in early 1934. The previous autumn, the county received a citizens’ petition asking that the new courthouse include a facing of native stone. This was not only for aesthetic reasons, but because the use of the stone would result in greater employment of local labor and the expenditure of more of the money in the local community. The walls are cut South Dakota stone, while the trim is Hot Springs, South Dakota sandstone. The building replaced the original 1883 courthouse that was declared unsafe by the fire marshal because it had 16 heating stoves and faulty wiring. The new courthouse reused many bricks from the original building in its interior. Construction continued through 1934, and the county formally accepted the finished building in February 1935. 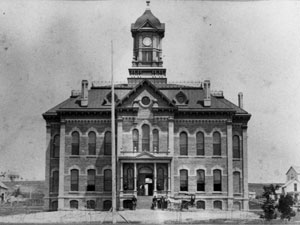 The interior contains such details as brushed aluminum stair rails with floral motifs at the top. The rooms of the courthouse are accessed through T-shaped corridors. The fourth floor once held the jail, which is now abandoned. Although completely remodeled, the courtroom still contains the historic judge’s bench and courtroom benches.

The old Hughes County Courthouse shown at left was erected in 1883 and the served an important role in the formation of the new South Dakota government in 1889. It was replaced in 1934 with the present Courthouse on this location. 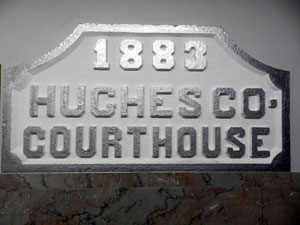 Large 1883 concrete name plate which was taken from the old courthouse and place on the wall as a remembrance.

The following historic events occurred in and around the Hughes County Courthouse: