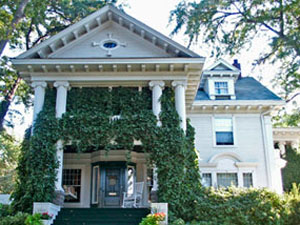 The two-and-one-half story Karcher-Sahr House is one of Pierre’s best examples of the Neoclassical architecture that became popular during the early 20th century in the United States. Neoclassical details on the Karcher-Sahr house include two-story Ionic columns, an elaborate cornice with dentil molding and modillions, a prominent front porch and side porch, and windows with multiple panes over a single pane. This excellent example of Neo-Classic architecture was built in 1910 by Henry and Adeline Karcher who had come to Pierre in 1883. The exterior design has never been altered. It has been continuously occupied by the family and is owned by Carla Sahr, widow of grandson William Karcher Sahr.

The original owner, Henry Karcher, was one of Pierre’s pioneers. He first traveled to the area for a hunting trip. The future for the town seemed bright, so he purchased a lot and built one of the first brick commercial buildings downtown, the Karcher Block. Karcher was a prominent citizen serving as both alderman and mayor. His main interest had been ranching, but a stroke in 1907 prevented him from taking up this profession. He moved his family into the city and built this house in 1910.

Karcher’s wife Adeline was also a prominent citizen of Pierre instrumental in founding the Women’s Club, the Carnegie Library, and Riverside Cemetery. Her daughter Marguerite married Fred Sahr, and they became the next owners. Marguerite was active in the Women’s Suffrage Movement as a writer for the feminist newspaper the South Dakota Messenger. The couple’s son William owned the house after them. He was a prominent attorney, served as a State legislator, and was president of the library board responsible for erecting the Rawlins Municipal Library.