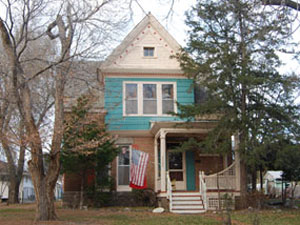 Built in what was originally East Pierre, the Henry M. McDonald House was one of the first in the community. McDonald, a pioneer businessman and president of the Trader’s Bank in Pierre, constructed the home in 1885 and was the first of several prominent South Dakotans to reside there. He patterned the house after his father-in-law’s home back in Wisconsin.

The home is a two-and-one-half-story brick and wood Queen Anne with some decorative elements in the Eastlake and Classical Revival tradition. The house features a hip roof with projecting gables, decorative shingles in the gables, dentil molding under the gables, and a front porch with slender, simple columns. 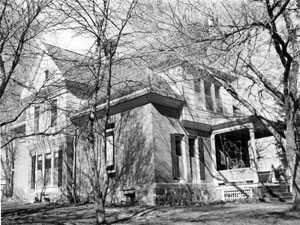 During the 1890’s, the Honorable James Ward leased the property from McDonald. Ward was a delegate to the 1885 State constitutional convention, former territorial auditor, and 1894 democratic candidate for governor of South Dakota. The owner in 1906, Ed Eakin, named the property “The Cedars” after the cedar hedge along the west edge of the yard. Dayton W. Canaday, former director of the South Dakota State Historical Society from 1968 to 1987, was a former owner.