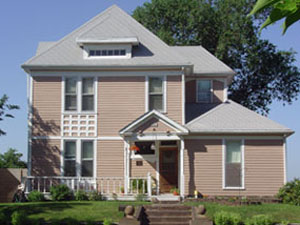 George McMillen, a brick contractor, built this house in 1883 and lived here until his death in 1895. John D. Hilger and Anthony D. Hengel bought the house at that time. Hengel served as councilman and mayor of Pierre. Later owners include banker W. H. Mateer and Genevieve Trask. Mrs. Trask served as State legislative chairman and supplied the champagne, a gift from her husband, for the christening of the U.S.S. South Dakota in 1941. She also had the honor of cutting the ribbon officially opening the new Missouri River Bridge to traffic in 1962.

The house was built in two phases–in 1883, the same year as the first county courthouse, and from 1884 to 1892. The McMillen House was one of the first homes in Pierre. The original house was a one-story, T-shaped building. Today, the cap of the T remains visible, while the hipped-roofed stem was incorporated into the later two-story, cube-shaped house. In the 1884 to 1892 remodeling, the residence was reoriented from the southwest to the northeast, so the front entrance opens up onto Broadway Avenue. Features of the house include four stained glass windows and interior doors with colored and etched glass. Another feature is a window in the sitting room that slides up into the wall of the story above to provide a doorway to the second porch.