Judge C.D. Mead built this house in 1883, though it was remodeled in 1910 by removing the roof and adding a second story. This home reflects the gradual shift from Victorian to Neo-Classical design that occurred in the early 1900’s. The fourteen room house remained in the Mead family until 1971. Another judge, Pat McKeever, next purchased it. More recently Dawnita and Charles Forell purchased and restored the house.

Judge Corwin D. Mead, a county judge and a prominent attorney and realtor, built this house between 1882 and 1883 and remodeled it later. The Judge C. D. Mead House is a Queen Anne design with some classical elements to which the judge added an additional half-story and a rear extension between 1908 and 1910. The house is architecturally significant because it reflects the gradual shift from Victorian to Neoclassical design in the early 20th century and the desire to keep up with trends. The architectural firm for the addition was J. H. Daverman and Son of Grand Rapids, Michigan. Judge Mead lived in the house until his death in the 1920’s. 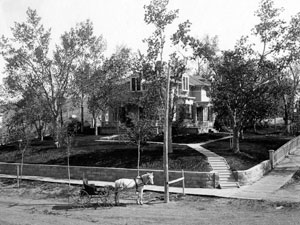 This photo shows a buggy and a white horse next to a block stone retaining wall and wooden walkway at an intersection. A walk, with a Y junction, leads to a two-story Queen Anne home with dormers, bay windows, an elevated wrap-around porch surrounded by leafy deciduous trees.

Shortly after Pierre became the permanent capital city, a building boom ensued. Judge Mead made the substantial addition to his home during this boom. These changes are hardly noticeable and merely make the house more substantial. The home did take on some Neoclassical influences but retains a definite Queen Anne form.

Queen Anne elements include the steeply pitched roof, bay windows and single story, full-width porch. The classical elements are the porch with roof supported by thick Tuscan columns, cornice with wide frieze underneath, and paired and tripled windows as well as bay windows.

After Mead’s death in the 1920’s, his unmarried daughter Ruth, kept the home. The house remained in her possession until her death in 1971.