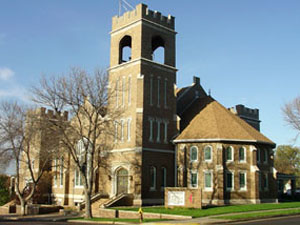 Constructed by a local contractor and devoted church member F. Turner, this church is in a more elaborate Gothic Revival style than the congregation’s earlier church, which was also in the Gothic Revival style. It features castellated towers and a rectangular plan with an apse, nave, and transept. The steep cross gable roof, asymmetrical floor plan, buttresses, pointed arch windows, and drip molds are all style defining elements of the building. 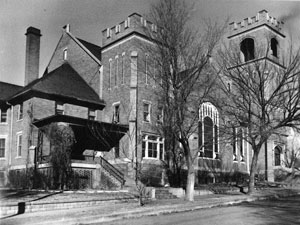 Gothic Revival elements are found throughout the interior. Doorways are Tudor arches. The interior is completely finished with oak, adding to the rich feeling of the Gothic Revival building. Each curved oak pew has an ornamental carved quatrefoil design that represents the authors of the four Gospels: Matthew, Mark, Luke, and John. Woodwork throughout is adorned with carved quatrefoils including the balusters of each staircase as well as the pews. Gothic style cutouts are visible in the sawn altar rail and on the balustrades of the balcony and the choir loft. The sanctuary features a vaulted ceiling, sliding pocket doors, and several original light fixtures. Original decorative light fixtures are also intact at the front entry and within the main vestibule. Included in the interior are remarkable stained glass windows illustrating the history of the church as well as the Methodist movement.

A swimming pool once stood at the south end of the basement but was filled in and covered in the 1940’s to make room for needed classroom space. The church also converted a library and a gymnasium to additional classroom space at the time of the Oahe Dam’s construction. These were important features the congregation used in conjunction with the fellowship hall and kitchen in the basement for families and groups to gather. The congregation built a large addition on the south side of the building in 2007.

The Methodist Episcopal Church established a congregation in Pierre in 1880, and the congregation built a frame church in the downtown area in 1881. Two years later, they sold this building and by the fall of 1883 constructed a new wood frame church in the typical small scale vernacular Late Gothic Revival style. Membership grew rapidly, and in 1910, the congregation laid the cornerstone for its new larger and grander building in the Late Gothic Revival style.