The Upper Pierre Street Commercial Historic District is important as the center of commerce in Pierre after 1900 and for its association with two prominent businessmen, Andrew C. Brink and Charles Hyde. The district includes the Brink and Mundt Buildings, named for the men who ran land and insurance businesses in the buildings, which both date from 1895, and the five buildings Charles Hyde constructed between 1906 and 1909. All seven of the district’s buildings are symbols of Pierre’s late-19th century pioneer architecture and early-20th century commercial progress. The buildings have simple Classical Revival details with the exception of the Brink Building, which is refaced with a much higher style Classical facade.

When Pierre was platted in 1880, construction was basically limited to the flood plain. The heights of storefronts were all different because of the variances in the grade. The 1906 addition of Upper Pierre Street allowed downtown to install a gravity sewage system for drainage in times of high water. The grading of the flat and hill at the same time was one of Pierre’s largest construction undertakings. The excess dirt resulting from grading Upper Pierre Street became infill in the flat. Concrete sidewalks were installed on Pierre Street up to Capitol Avenue. This project helped create unified storefronts and greatly improved the aesthetics of downtown.

The intersection of Capitol Avenue and Pierre Street became the commercial center of Pierre after 1900 thanks to Andrew C. Brink and Charles Hyde. Andrew C. Brink was involved in both A. C. Brink & Co. (wholesale) and Brink & Tollinger (retail) flour and seed commission merchant businesses in the 1890’s. He also worked as a building contractor. He also became one of the city’s most prominent real estate men and ran the A. C. Brink Land Company and the Permanent Concrete Construction Company out of the Brink Building for many years. 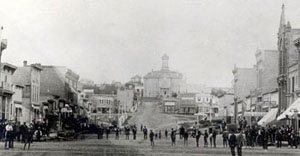 Charles Hyde was an entrepreneur, real estate dealer, and promoter, who settled in Pierre in 1887. Born in Illinois in 1860, Hyde worked as a detective, reporter, cattle hand, and semi-professional roller skater before his move to real estate. He also made his fortune from founding the American Exchange Bank in 1907 and from ranching. Hyde built several businesses along Lower Pierre Street before developing the commercial district on Upper Pierre Street. Many envious people, particularly in the flat district, disliked Mr. Hyde because of his success and because they opposed development of the Upper Pierre Street District on the hill.

Hyde’s first building in the Upper Pierre Street Historic District was the Hyde Block at 101 South Pierre Street that Jeffers & Henry, architects out of Aberdeen, designed in 1906. The first businesses in the building included a drugstore, bank, hairdresser, restaurant, jewelry store, and a grocery store.

Hyde did his own contracting on the next two buildings–The Mallery Store at 105 South Pierre Street and the Grand Opera House at 109 South Pierre Street. The Mallery Store, later known as Moore’s Department Store and also as London’s, dates from 1906. Its original owner was John E. Mallery, who sold dry goods, shoes, and ladies-ready-to-wear apparel after moving from Wisconsin to Pierre in 1882, where he succeeded in the new prestigious business district. The Mallery Store is located between the Hyde Block and the Grand Opera House and differs from those buildings because of its large glass display windows and two doorways in a recessed entrance. 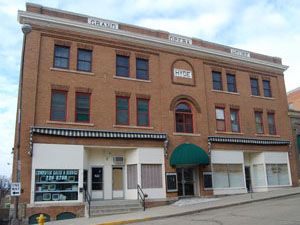 The Hyde buildings are all constructed of red or brown brick and have Classical Revival details. The buildings are either two or three stories, except for the one-story Moore’s Department Store. Four of the five Hyde buildings have projecting pressed metal cornices decorated with dentil molding along the street facing facades. They are grouped along Capitol Avenue and the north end of Pierre Street.